New York’s state legislators would like a raise, but a review of state payroll data shows that more than three-quarters of them already earn more than their frequently cited $79,500 statutory base salary.

The extra pay consists of annual stipends issued to legislators who hold committee posts or other leadership titles. The payments, enumerated in Article 2, Section 5A of the Legislative law, range in value from $9,000 to $41,500.

At the start of 2013, the most recent full year for which legislative pay data are available, all 63 members of the state Senate were eligible to collect a stipend on top of base pay.  (Sen. Malcolm Smith, D-Queens, was subsequently stripped of his leadership position and extra pay after being indicted on bribery charges, while Sen. Tony Avella, D-Queens, reportedly declined to accept his stipend.)  Nearly five out of six senators were paid more than $90,000 in 2013, including 17 who were paid more than $100,000.

Click here for a sortable list of all legislators with their leadership stipends and total pay as of 2013.

The New York Legislature’s base pay of $79,500 is the third highest in the country, trailing only California and Pennsylvania, and its operational budget of $906,418 per member (as of 2012) is the fourth largest, behind state legislatures in California, Pennsylvania and Florida. As of 2011, New York spent the most of any state on added legislative pay stipends, according to this analysis by an Illinois newspaper, based on National Conference of State Legislatures data. 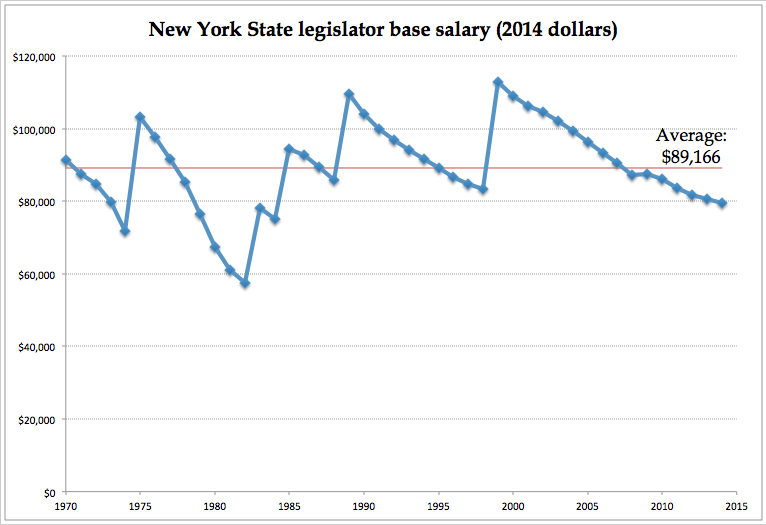