New York would pay a price for running a high-cost Medicaid program if the Senate GOP health plan becomes law.

A little-discussed provision of the Senate’s Better Care Reconciliation Act would dock a portion federal funding from states that spend the most per Medicaid enrollee, while boosting aid to the lowest-spending states.

Based on current funding levels, this “equity” adjustment could cost New York between $325 million and $1.3 billion a year in federal aid starting in 2020. 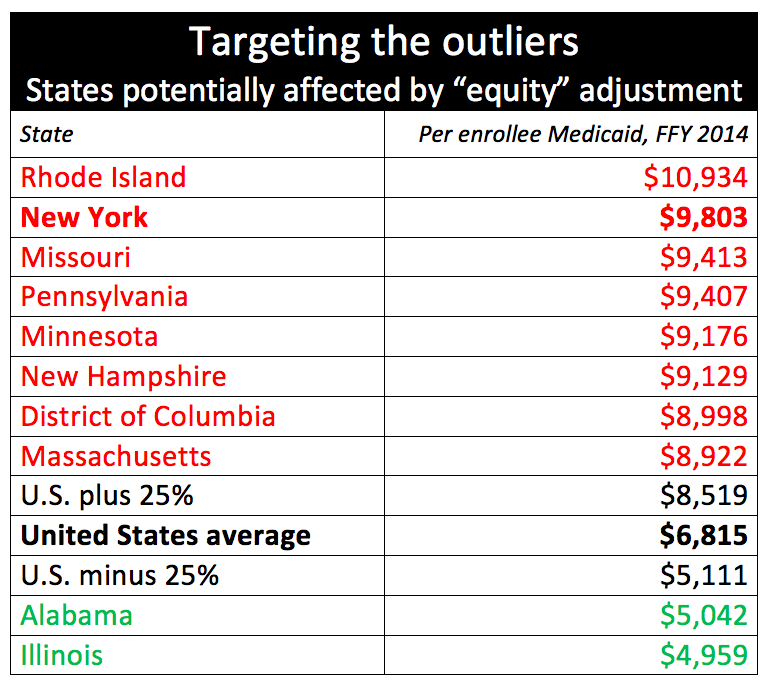 Low-spending states likely to receive a boost in federal aid would include Alabama and Illinois.

(This listing is based on per-enrollee Medicaid spending amounts from National Health Expenditure data from the U.S. Centers for Medicare & Medicaid services. The Kaiser Family Foundation has calculated different per-enrollee figures, but New York still lands in the high-spending category.)

The proposed rule would attempt to address a long-standing inequity in the Medicaid financing system: Because the federal government reimburses a fixed percentage of each state’s costs, states that spend the most also draw the most federal aid.

New York, as a high-wealth state, receives the lowest possible matching rate of 50 percent. Yet because it spends so much of its own money on the program, it receives more federal matching aid per capita than poor states such as Mississippi, with the maximum matching rate of 75 percent.

Like the House bill, BRCA would for the first time cap how much aid states can draw – based on current levels of per-enrollee spending, trended forward by inflation. On top of that cap, the Senate bill would further restrict aid to states with per-enrollee spending that exceeds 25 percent of the national average – a category that includes New York. The rule would reduce the cap on aid to these states by between 0.5 and 2 percent, depending on the discretion of the secretary of Health and Human Services.

States with per-enrollee spending more than 25 percent below the national average would see their caps lifted by 0.5 to 2 percent.

High-cost states such as Alaska, North Dakota, and Montana, would be exempted from this rule on grounds that low population density tends to drive high per-person healthcare spending.

The equity rule would come on top of other cuts New York is facing under both BCRA and the House’s American Health Care Act.

Both the House and Senate bills would phase out the extra aid to state under the Affordable Care Act’s Medicaid expansion, which would ultimately cost New York about $4 billion. They would compel Albany to absorb $2.3 billion in Medicaid costs that are currently shifted to counties other than New York City. And they would also substantially reduce funding for the $4 billion Essential Plan, an optional benefit under the ACA that only New York and Minnesota exercised.