Despite the pandemic’s costly and painful disruptions, most hospitals in New York and elsewhere ended their 2020 fiscal years in the black after receiving billions in relief from Washington, an analysis of their financial filings shows.

Among reports filed by 147 hospitals across the state, 58 percent showed positive net margins for the year, just below the 59 percent average of the previous nine years.

Source: Centers for Medicare & Medicaid Services. Limited to data from 147 hospitals that have filed cost reports for 2020.

Behind that ordinary-seeming bottom line was extraordinary turmoil – waves of critically ill patients, scrambles for extra staff and scarce supplies, harrowing death tolls and, on top of that, slumps in revenue as routine procedures were cancelled or postponed.

Given those stresses, the filings show that hospitals faced a double-bind of spiking costs and decimated revenue. Yet federal emergency funding appears to have largely offset the resulting losses, putting most hospitals’ books in balance through the earliest and worst period of New York’s pandemic.

Under a series of relief packages enacted in 2020 and 2021, the federal government has distributed a total of $121 billion in emergency funding for hospitals and other health-care providers nationwide.

New York providers have received $13 billion, which was the largest total of any state and the second-highest per capita amount after South Dakota (see chart). About 61 percent of New York’s allocation, or $8.4 billion, flowed to hospitals. 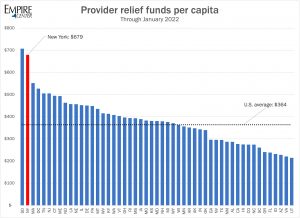 To gauge the impact of the federal relief effort, this analysis drew from cost reports that hospitals submit annually to the federal Centers for Medicare & Medicaid Services, or CMS. As of mid-January 2022, CMS had posted 2020 reports from 147 general hospitals, or about four-fifths of the statewide total.

Among the hospitals missing from the database were the 11 hospitals owned and operated by New York City and several prominent private-sector institutions, such as NYU Langone in Manhattan, Strong Memorial in Rochester and St. Peter’s in Albany. Notwithstanding those gaps, the available data cover a broad cross-section of hospitals in every region of the state.

As seen in the chart below, the reporting hospitals’ collective expenses jumped by 7 percent while revenue from patient care dropped by 6 percent. By the end of the year, however, a 55 percent surge in other revenue – including relief funds from Washington – had closed the gap for most. 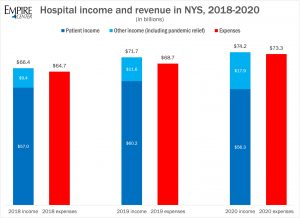 The same was true nationwide: Among the 3,500 U.S. hospitals that have filed their cost reports for 2020, 78 percent showed positive net margins, compared to 71 percent in 2019. (New York had a greater share of money-losing hospitals, at 43 percent, than nearly all other states. That was consistent with the pattern of the past decade and not necessarily pandemic-related.)

With New York, the budget-balancing effect of the federal relief could be seen across the state – with aggregate hospital income exceeding aggregate expenses in nine of 10 regions. The exception was Western New York, where the hospitals fell 5 percent short of breaking even (see table).

The reports show that COVID’s financial impact on hospitals, while clearly negative, was less severe than the industry initially feared.

At a legislative hearing in August 2020, industry officials presented an analysis predicting losses of between $20 billion and $25 billion – the equivalent of a quarter or more of patient revenue – from March 2020 through April 2021. The officials cited a similar estimate at budget hearings in February of 2021.

They acknowledged that their analysis did not factor in federal relief, which one industry official called “just a drop in the bucket.” Another predicted, regardless of the extra aid, that “every hospital in the state is going to lose money this year.”

In the end, however, most of the state’s hospitals realized a positive net margin in 2020, which included the worst parts of New York’s pandemic. This indicates that their losses were not as devastating as had been anticipated, and that relief aid was enough in most cases to balance their books.

The health-care industry’s pandemic-related financial strains continued through 2021, but so, too, did the flow or relief funds from Washington. The net effect of these cross-currents on hospitals is not yet clear because few have filed their cost reports for the 2021 fiscal year.

These findings have implications for the current budget debate in Albany. The Legislature is considering proposals from Governor Hochul that would increase state funding for hospitals across-the-board – including for institutions that received large amounts of relief funding and weathered the pandemic with relatively healthy bottom lines.

Before committing additional taxpayer funds, lawmakers should seek a full accounting of the aid hospitals and other providers have already received – including updated figures for 2021 – and assure that any further relief is properly targeted to parts of the health system with greatest need.