The health-care agenda laid out by Governor Hochul in her budget proposal last week leaves a lot of questions unanswered. Here are a few of them.

What is she doing to strengthen the state’s pandemic defenses?

The harrowing spring of 2020 showed that New York was both unusually vulnerable to an international outbreak and ill-prepared to respond. The state’s public health infrastructure was unable to detect COVID’s early spread for several weeks, and officials reacted slowly and ineptly when a first case was confirmed.

When critical supplies ran short, the state’s pandemic stockpile turned out to be full of materials that were long past their expiration date.

Despite these and other breakdowns, Hochul’s budget makes no mention of investigating what went wrong, learning from those mistakes or making sure New Yorkers are better protected next time.

How much is she really spending on the health-care workforce?

The top-featured proposal of Hochul’s State of the State speech was a $10 billion “multi-year investment” in the health-care system, with a goal of growing its workforce by 20 percent in five years.

As described, this investment is to include retention bonuses of up to $3,000 for front-line caregivers, across-the-board increases in Medicaid fees, grants for safety-net providers, new subsidies for education and training of medical professionals, and $1.6 billion in capital funding for hospitals, nursing homes and other caregiving organizations.

But her budget proposal was vague about the bottom-line cost of each component and how many years it would take to spend $10 billion. The amounts listed in her briefing book (as originally published) did not match the numbers in an accompanying chart, and there was no indication of how much would come from federal matching funds.

Also unclear is whether the overall effort is necessary, given that the state already has 28 percent more health workers per 1,000 residents than the national average, and their ranks have been growing steadily without Albany’s intervention.

One bright spot is her proposal to reform the state’s unnecessarily restrictive rules and standards for licensing health professionals – including a streamlined system for accepting credentials issued by other states.

Why have a double-standard for health worker bonuses?

To earn the maximum bonuses, private-sector health workers would have to average 40 hours a week during designated “vesting periods,” but the minimum for state-employed health workers would be 37.5 hours. This presumably is meant to accommodate the standard 37.5-hour work week written into some state labor contracts, but seems to disregard non-state contracts with the same feature.

Why design a Medicaid rate that lasts only two years?

As proposed in Part I of the governor’s health and mental hygiene budget bill, the governor’s 1 percent across-the-board rate hike for Medicaid providers would expire March 31, 2024, meaning rates would drop back to what they are now. This seems counterproductive if the goal is for providers to improve pay and benefits for the long term.

What is the plan for public health?

Hochul’s budget would boost state aid for local public health agencies operated by New York City and most counties – recognizing their front-line role in a multi-level system of defense against pandemics and other population-wide threats.

But her spending proposals for the state Health Department send a puzzling mix of signals. She would more than double funding for the department’s Center for Community Health, which monitors infectious diseases, but chop 22 percent from the budget for the Wadsworth laboratories – which was the state’s only source of COVID testing early in the pandemic.

This would be the second big cut in two years for Wadsworth, leaving it with barely half its budget from 2019 before the pandemic and a third of its funding a decade ago. 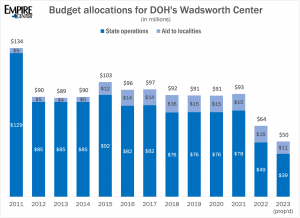 Source: NYS Division of the Budget

Oddly, budget documents indicate that the staffing levels for both Wadsworth and the Center for Community Health would not change at all – even as the department’s Medicaid administration branch grows by 352 full-time equivalents, or 26 percent.

Her budget announcement also touted a $750 million allocation to build a new facility for Wadsworth at the state’s Harriman office campus. But that is not new money. The new lab has been on the drawing board for years, and the funding she cited has been budgeted and approved since 2018.

How is she going to shrink Medicaid rolls?

The Hochul administration’s financial plan “assumes that enrollment levels will peak at nearly 7.7 million in FY 2023 and return to near pre-pandemic levels in FY 2024” – a decline of 19 percent in one year. Even so, state spending on the program is due to jump 20 percent as federal emergency funding expires.

Such a large enrollment drop would be unprecedented – as Comptroller Tom DiNapoli’s office pointed out in a recent report.

“Because of policy changes, including expansions in eligible coverage, improving economic conditions as measured by the statewide unemployment rate have not significantly reduced Medicaid enrollment levels over the previous 15 years,” the report said.

If enrollment stays high, the report warned, the state could face billions in unanticipated expenses.

Hochul’s budget does not discuss the challenge of shifting so many people out of Medicaid over the next two years. Nor does she address the longer-term trends that have caused people above the poverty line to become a majority of enrollees – and to compete for resources with the indigent and disabled populations that were Medicaid’s original focus. 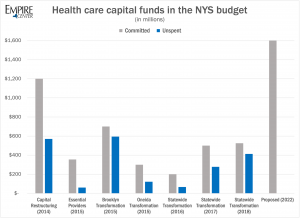 What’s the rationale for another round of health-care capital grants?

Hochul is proposing to authorize $1.6 billion in taxpayer-funded capital grants that hospitals, nursing homes and other providers could use to expand or renovate their facilities or buy high-end equipment.

The governor did not cite any kind of study or needs assessment to justify this amount. Of the $3.8 billion previously allocated for health capital over the past eight years, $2.1 billion remains unspent (see chart).

The state formerly subsidized the capital projects of certain not-for-profit health providers by offering low-cost bonding through the Dormitory Authority. More recently, though, Albany has gotten into the habit of providing straight grants and allowing for-profit operators to apply.

Lawmakers imposed few restrictions on who could apply or how the money could be spent, leaving the door open to pork-barrel politics and cronyism. In one case, the Cuomo administration awarded $25 million to finance a pair of medical office buildings that were already under construction before the grants were awarded. Partners of the sponsoring business, a large medical practice, had donated $400,000 to the governor’s campaign account.

Hochul is separately proposing to deposit $1 billion of the state’s reserve funds into the so-called Health Care Transformation Fund – which was established by Cuomo in 2018, and which the governor can spend on virtually any health-related purpose without even notifying the Legislature in advance. He went on to use some of the money to finance Medicaid rate increases for hospitals and nursing homes, benefiting some of his biggest campaign supporters, shortly before Election Day.

Giving the governor a free hand to spend that much money in an election year was a bad idea then, and remains a bad idea now.