The Empire State’s real gross domestic product (GDP) decreased 8.2 percent in the first three months of 2020 compared to the fourth quarter of 2019, ranking 49th out of 50 states as the new coronavirus began to spread, according to Bureau of Economic Analysis (BEA) estimates of seasonally adjusted annual data. Only Nevada was ranked lower; the output of that state’s gambling-intensive economy also sank 8.2 percent as casino customers vanished, but its decline was marginally worse than New York’s.

Real GDP dropped in all 50 states, producing an average decline of 5 percent through the first quarter. Reflecting the pattern of the COVID-19 outbreak during that period, the slowdown was least severe in central and western states where the impact of the virus was most limited. 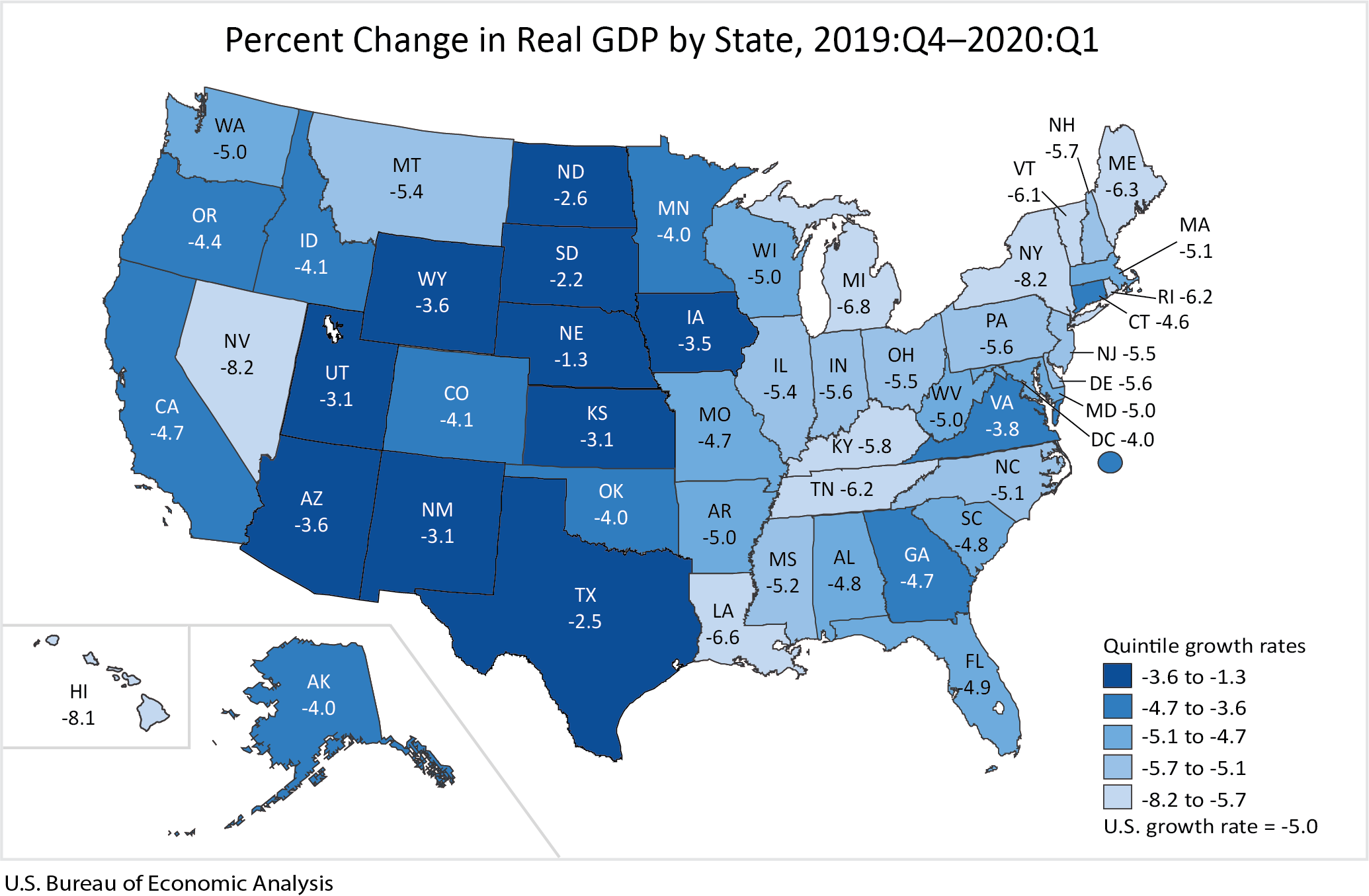 California, which imposed equally extensive lockdowns and shelter-in-place orders slightly earlier than New York’s in March, experienced a real GDP decline of 4.7 percent, not quite as bad as the national average. This suggests the extent to which New York’s crash reflected not just the suspension of normal commerce but the particular structure of the state economy, especially in and around densely populated, transit- and tourism-intensive New York City.

According to the BEA statistics, the biggest contributor to New York’s meltdown was the financial services sector, which accounted for 2.18 percentage points of the 8.2 percent decrease. The next biggest contributors to the state’s GDP drop were accommodation and food services (-1.18 percent), arts, entertainment and recreation (-0.79 percent) and retail trade (-0.54 percent), respectively. The only sizable New York business sector not to register a decline was management of companies and  enterprises (up 0.12 percent), which was most prepared to continue operating remotely after offices began closing in in mid March. Tiny increases in output were estimated for the utilities sector, and for agricultural, forestry, fishing and hunting, and mining and quarrying sectors.

Like the personal income estimates released by BEA last month, the GDP numbers also showed that New York was an economic underperformer even before the pandemic. According to updated estimates, New York’s economy expanded just 1.4 percent in the fourth quarter of 2019, well below the U.S. average of 2.1 percent. Only nine states had lower numbers for that period.

The data provide further evidence that a V-shaped recovery is not in the cards for New York, in particular. As reflected in more recent payroll employment estimates, the economic downturn was, if anything, even worse in April and May. And as The New York Times reports today—echoing warnings here months ago—New York City in particular “is mired in the worst economic calamity since the financial crisis of the 1970s, when it nearly went bankrupt.”

The continuing impact of the pandemic on every region of the state was reflected in the latest unemployment benefit filing statistics. As shown below, the number of initial claims filed during the week ending June 27  actually increased over the previous week in every region of upstate New York, and on Long Island.