When public schools across the Empire State open their doors for 2018-19, pupil enrollment will be at its lowest level in nearly 30 years—continuing a long-term decline that has increasing relevance to Albany’s perennial legislative battles over school funding and education policy.

Including charter schools and pre-kindergarten programs, New York public school enrollment in 2017-18 was estimated at 2,608,473 million, 15,222 fewer than in 2016-17 and just slightly above the 1991-92 count of 2,584,967, according to the State Education Department.1 The latest U.S. Census data, which shows a continued decline in New York’s statewide population of school-age children in 2017, points to yet another enrollment decrease in the new school year.

New York public school enrollment reached an all-time high of 3.5 million in 1970-71, then declined by a million in the post-baby boom era of the 1970s and ’80s. After rebounding through the 1990s, enrollment partially recovered to its most recent peak of nearly 2.9 million in 1999-00. However, it has dropped every year since then, by an annual average of 0.5 percent, for a total decrease of more than 250,000 in the last 18 years.2 At this rate, in a few more years, enrollment in New York schools could fall to levels last seen in the late 1950s. 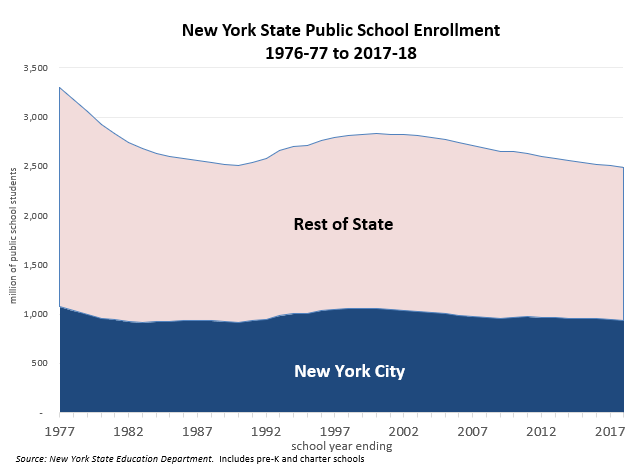 The 10 percent decrease in New York school enrollment since the turn of the century contrasts with a national enrollment increase of 7 percent during the same period.3 The difference reflects underlying demographic trends, including upstate New York’s continuing population decline and out-migration losses to other states.

As shown by the map below, which focuses on trends over the past 10 years, school enrollments have been shrinking fastest in upstate rural counties, with increases confined to parts of New York City, Westchester and Rockland County. 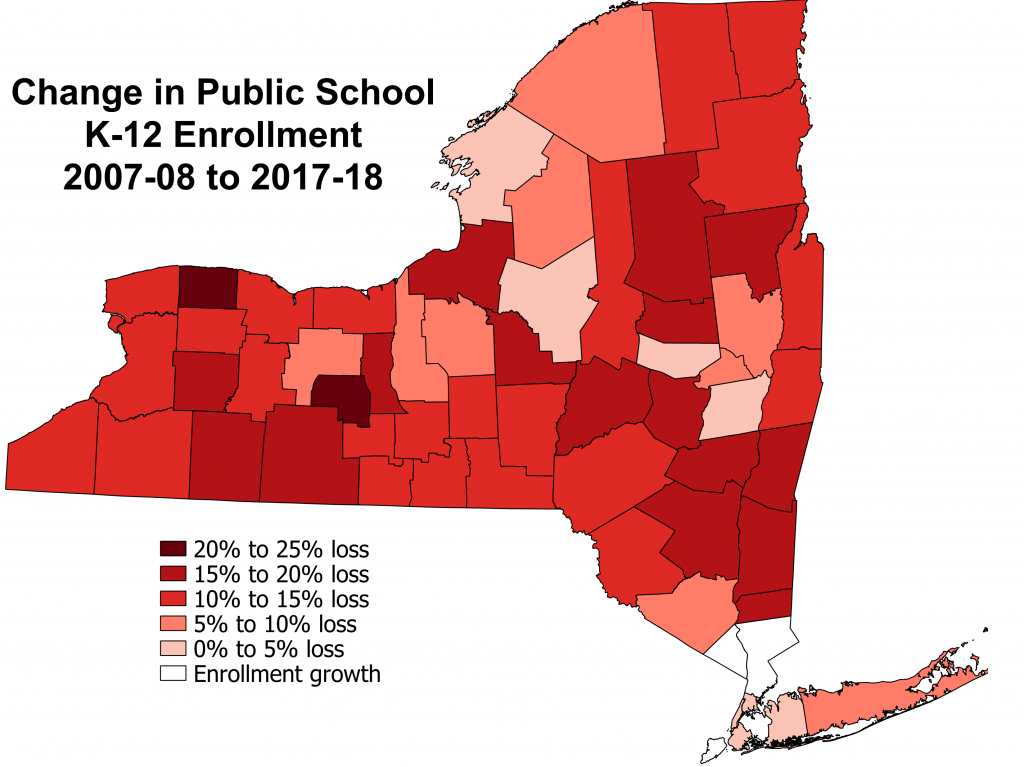 Only 100 of the state’s nearly 700 districts have had net enrollment growth since 2007-08. Pockets of growth tend to be concentrated at socio-economic extremes, ranging from the wealthy Rye and Mamaroneck school districts, to struggling upstate cities such as Albany and Syracuse, to inner suburbs such as Roosevelt in Nassau County.