New York’s health benefit costs increased faster than the national average in 2020, leaving it with the second-least affordable coverage in the U.S.

The state’s average total cost for employer-sponsored individual coverage was $8,177 and for family coverage was $23,381, according to an annual survey by the federal Agency for Healthcare Research and Quality. 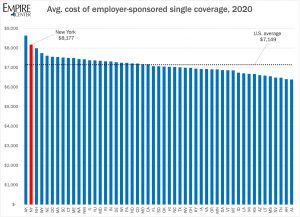 The price for single coverage in New York was $1,028 or 14 percent higher than the U.S. average. On a percentage basis, that gap was 2.5 times larger than it was a decade ago (see second chart). 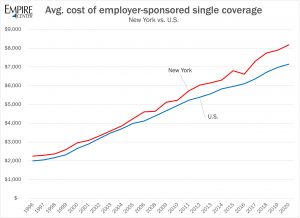 The disparity is driven in part by policy choices made in Albany, including heavy taxation of health benefits and a roster of coverage mandates and other regulations that gets longer every year.

The 2021 legislative session was no exception. Lawmakers introduced at least 100 bills that would increase taxes or tighten regulation of health insurance, seven of which were approved by both houses. They included a tax hike and six regulatory changes, most of which would limit insurers’ ability to control spending on prescription drugs. Each of the bills is likely to push premiums still higher.

One regulatory measure – requiring insurers to cover addiction treatment at newly established “crisis stabilization centers” – was signed into law by former Governor Cuomo as part of the state budget. The other bills await review by Governor Hochul.

The proposed tax hike would increase a levy known as the “covered lives assessment” by $40 million or 4 percent. Because of the unusual way the assessment is collected, residents of New York City pay the most of any region, at a rate 19 times higher than the lowest-paying region of Utica-Watertown.

The $40 million is to flow to county governments, nominally to finance “early intervention services” for preschoolers with disabilities. However, the bill does not restrict how counties use the money, so it could be used to offset existing expenses – and provide general fiscal relief – rather than to improve or expand services for children.

The covered lives assessment is one of two taxes on health benefits levied under the state’s 25-year-old Health Care Reform Act. Together they collect almost $5 billion, making them the state’s third-largest source of revenue after income and sales taxes.