New York’s health insurance affordability gap surged to a new high last year, with state residents and their employers paying an average of almost 16 percent more than the U.S. norm for single coverage, according to newly released federal data.

New York’s average premium for a single, private-sector employee, at $8,542 per year, maintained its ranking as highest in the continental United States, second only to Alaska at $9,037 (see first chart). 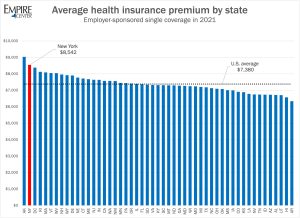 It also hit 15.7 percent above the national average, which was the widest disparity for New York in the 25-year history of the annual survey by the U.S. Agency for Healthcare Research and Quality (see second chart). 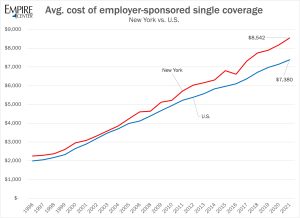 New York’s average family premium, at $23,450, was third highest among the states, behind Connecticut and New Hampshire, and 14 percent above the U.S. norm.

New Yorkers have long faced steeper-than-average insurance premiums due to its generally high cost of living and ill-conceived insurance regulations. The affordability differential has worsened in recent decades as state lawmakers imposed steep taxes and expensive mandates on health insurers – a trend that continued in 2021 and 2022.

Health insurance taxes collected under the Health Care Reform Act, which add approximately hundreds of dollars to a typical premium, are projected to raise more than $5 billion this year, making them the state’s third largest source of revenue after income taxes and sales taxes.

While health premiums have spiraled across the country, New York’s have typically outpaced the national pace.