In an update to Hospital Compare, a consumer guide from the U.S. Centers for Medicare & Medicaid Services, the state’s hospitals received an average of 2.46 out of 5 stars—the lowest of any state except Nevada and the District of Columbia. 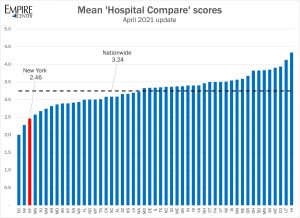 The nationwide Hospital Compare average also improved, from 3.08 to 3.24—in part reflecting a change in how CMS synthesizes data on dozens of quality measures into a single rating.

Five-star ratings accounted for 5 percent of all grades given in New York, compared to 14 percent nationwide.

New York also fared poorly in the quarterly “Hospital Safety Grade” report from the Leapfrog Group, a private watchdog. Just 10.7 percent of the state’s hospitals received an “A” for avoiding medical errors and other measures of preventable harm, a slight improvement from 9.8 percent last fall. However, its ranking among the 50 states dropped from 45th to 46th.