The state share of Medicaid spending is projected to jump 22 percent under the recently approved state budget, an unusually steep one-year jump for what is already one of New York’s biggest expenditures.

The updated financial plan released this week by the Cuomo administration anticipates the state will pay $27.5 billion toward the health plan for the low-income and disabled, an increase of $5 billion. Total Medicaid spending, including federal aid and state-mandated contributions from local governments, is expected to be up $7.6 billion, or 10 percent. 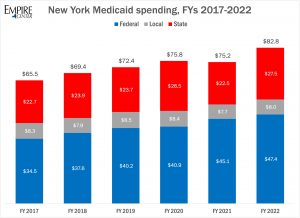 Those are by far the largest Medicaid increases of Governor Cuomo’s term in office, both at the state and total level.

The surge appears to be driven by two pandemic-related factors—rebounding utilization of the health-care system and rising enrollment.

Even as coronavirus patients overwhelmed some hospitals last spring, routine medical activities dropped sharply due to fear of infection, a temporary ban on elective procedures and other lockdown policies.

As a result, spending by New York Medicaid, as with many health plans, was down overall in 2020—and is currently jumping back to normal.

Meanwhile, Medicaid enrollment surged as New Yorkers lost jobs and income during the pandemic-induced economic downturn. The rolls grew from just over 6 million in February 2020 to 7 million in April. Although the economy is recovering, that trend has not yet been reflected in enrollment figures.

The impact on state finances has been blunted somewhat by federal relief funding, which included boosting the federal matching formula, which normally covers half of New York’s costs, by 6.2 percentage points—which was worth $3.4 billion in 2021. 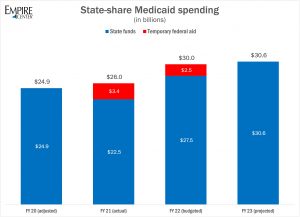 The Cuomo administration expects that extra aid to last through the first three quarters of this fiscal year, reducing its value to $2.5 billion in 2022. That drop largely explains why New York’s contribution is rising 22 percent when overall costs are up 10 percent.

That same “cliff” effect is likely to repeat next year, when what’s left of pandemic relief funding expires. The state will either have to close the gap with its own money or find a way to cut costs.

A late April report from the office of Comptroller Tom DiNapoli highlights another Medicaid-related development:

The State continued to defer $1.7 billion of Medicaid payments ($3.5 billion total including federal share), despite the availability of year-end resources in SFY 2020-21 to make the payment in the fourth quarter. These payment delays provide the appearance that State Department of Health Medicaid spending remains within the “Global Cap,” but obscure true spending on the program. Furthermore, the combined impact of deferred payments and enrollment growth will increase pressure on the Financial Plan in subsequent years, particularly in the event of another economic downturn.

The global cap, which dates back to Cuomo’s first year in office, nominally limits the growth of state Medicaid spending based on the medical inflation rate—although it is subject to loopholes that have grown over time. It also empowers the executive branch to unilaterally trim Medicaid payments as necessary to stay on budget, but the governor has never exercised that authority.

As the comptroller’s report also points out, the new budget gives no details on how it will use another temporary pot of federal aid—worth $1.6 billion and earmarked for home-based care for the elderly and disabled. Budget legislation allows the executive to use that money for “grants that are not advertised, competitively awarded or subject to the Comptroller’s pre-approval of contracts,” which undermines safeguards against waste, fraud and abuse, the report warns.

Meanwhile, cash flow within the state’s Medicaid program continued to fluctuate significantly from one quarter to the next throughout 2021—and is projected to do the same in 2022. These gyrations appear to reflect the Cuomo administration’s strategy of delaying certain payments from one fiscal year to the next—which made it appear that the program was staying on budget when, in fact, it was slipping increasingly out of balance. 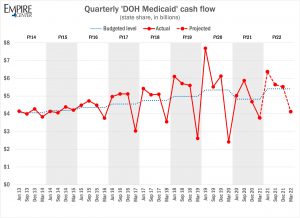