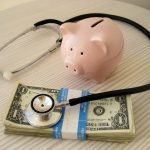 As seen in the chart below, Medicaid spending has been dipping in the fourth quarter of each fiscal year, then surging back upward over the next three quarters – and the swings have gotten steadily larger. 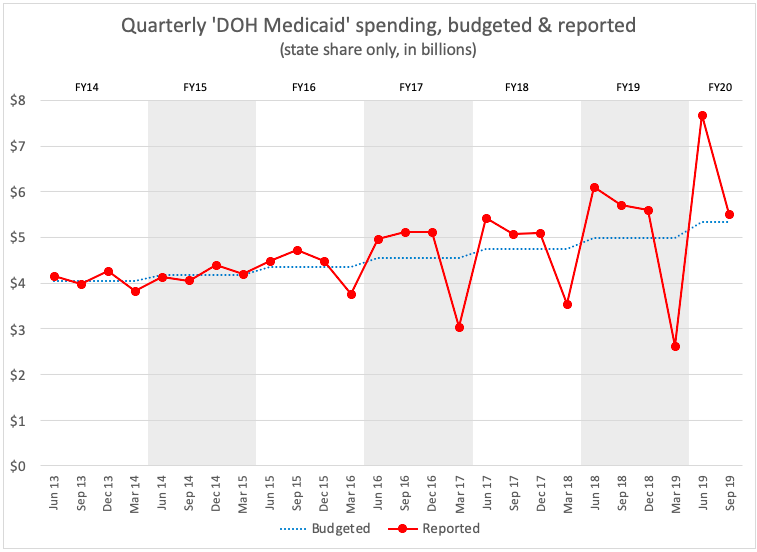 Source: Division of the Budget (clicks to enlarge)

This appears to reflect the Cuomo administration’s strategy of delaying certain payments from one fiscal year to the next – which made it appear that the program was staying on budget when, in fact, it was slipping increasingly out of balance.

The Budget Division first publicly revealed this practice in the Annual Information Statement, a report to bond holders that was published in June:

The State has, at times, taken actions to manage the timing of Medicaid payments to ensure compliance with the Global Cap. Between FY 2015 and FY 2018, DOH managed the timing of payments across State fiscal years that ranged from $50 million to roughly $435 million. In FY 2019, DOH deferred, for three business days, the final cycle payment to Medicaid Managed Care Organizations, as well as other payments. The FY 2019 deferral had a State-share value of $1.7 billion and was paid utilizing cash on hand in April 2019, consistent with contractual obligations and had no impact on provider services.

In the chart above, the blue dotted line shows the state share of Department of Health Medicaid spending (which excludes funding that flows through the Office of Mental Health and the Office for Persons with Developmental Disabilities), as shown in the enacted budget financial plan at the outset of each fiscal year. The red line shows actual spending as reported in the enacted budget financial plan of the following fiscal year.

In the early quarters of each year, actual spending consistently exceeded the budgeted amount, which normally would result in a deficit by year end. However, the Cuomo administration postponed payments that were due in the year’s final months, making it appear that the program was staying on target. This, of course, contributed to higher spending in the following year, requiring the delay of ever larger amounts in subsequent fourth quarters.

By March 2019, the cycle has snowballed to the point that the state delayed an entire month’s worth of Medicaid payments, or $1.7 billion, into early April. That postponement, coupled with the underlying rate of spending that was higher than previously disclosed, led to the $4 billion deficit the state currently faces.

Neither the $1.7 billion postponement nor any of the previous, smaller delays was disclosed to the Legislature or the public until May 2019, by which time lawmakers had already approved the budget for 2019-20.

The Cuomo administration has said it will close part of the resulting gap by finding $1.8 billion in savings by March 31. The first step in that process, a 1 percent across-the-board cut in most Medicaid payments to providers and health plans, was announced on Dec. 31.

The remaining deficit of $2.2 billion is to be resolved through a “permanent adjustment to the timing of payments,” effectively pushing that cost perpetually into the future.