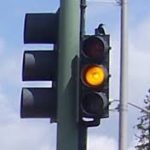 The Labor Department reports that its Index of Coincident Economic Indicators (ICEI) dropped in December at a 2.6 percent annual rate. It was the fourth consecutive month in which the Index has dropped.

Since the inception of the ICEI in 1970, such a four-month decline has never occurred outside a recession in New York.

The ICEI model combines and weights key economic indicators including private sector employment, the unemployment rate, average weekly hours of manufacturing workers and sales tax collections. As the Labor Department website cautions, the index “does not predict how the state’s economy may be performing in the future.” However, the Index is the closest thing we have to a general current conditions and trends report for the state. Here’s how it’s looked over the past year: 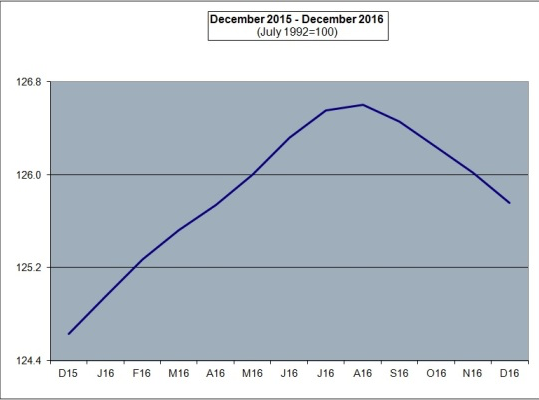 Measured on a year-to-year basis, the index level in December was up only 0.9 percent over December 2015.  That was the third weakest such growth in a non-recession period since 1970.

Over the past 47 years, when the index has performed like this, it has always pointed to a recession, as illustrated  below (with last few months circled in red). 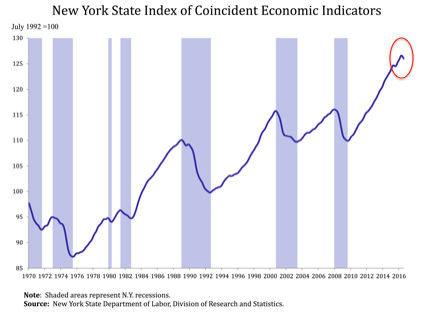 So, does this means New York is headed into a recession now?  Not necessarily. In an increasingly tech-dominated economy less reliant on manufacturing employment, the factors used to produce the ICEI may have become less indicative of overall conditions. In addition, the ICEI as it now stands is based on preliminary labor market data that is regularly revised, including a big annual re-benchmarking of employment numbers now underway. When the adjusted numbers come out in March, they could result in some upward (or downward) adjustment to the ICEI.

On the other hand, a similar New York economic index maintained by the Federal Reserve Bank of New York has been paralleling the trend in the state’s Index. New York State ranked among the bottom 10 (slowest growing) states in the forward-looking State Leading Indexes report from the Philadelphia Federal Reserve, which is designed to predict a six-month growth rate in coincident indexes. The next State Leading Index report is due out in February.

At the very least, the indicators are a strong fiscal caution signal for the state government, although schools are predictably clamoring for much more than the $1 billion aid increase Cuomo has proposed, and the governor’s own “free” tuition promise (among the out-year program expansions) could be much more costly than he’s willing to admit.

On the revenue side, Cuomo’s proposal for a full three-year extension of the so-called millionaire tax is also risky. The investment-, business profit- and bonus-driven incomes of very highly paid people are notoriously volatile, dropping further and faster on a percentage basis than those of most taxpayers when economic conditions falter, especially when the stock market drops. Keeping the top rate higher, which has further boosted Albany’s already heavy dependency on the highest earning 1 percent, not only increases the risk of a revenue dive but threatens to hamper the state’s recovery from a recession, as happened in the early 1990s.

President Trump and congressional Republicans have advocated tax reform plans that would eliminate or curtail the federal deductibility of state and local income taxes, which would substantially raise New York’s net tax price relative to other states with low or no such taxes.

Last but least, another big state budgetary risk factor is the impact of Congress’ coming reworking of Obamacare and likely changes to the Medicaid program, which could cost the state billions of dollars.