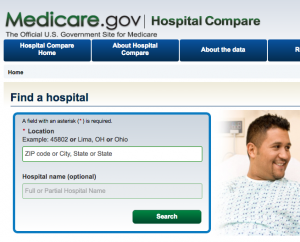 On Wednesday, the Centers for Medicare & Medicaid Services (CMS) released its first-ever star ratings for hospitals across the country, based on 64 measures of quality.

Just one New York institution, the Hospital for Special Surgery, received the top rating of five stars, and only 12 received four stars. Forty-nine of the state’s hospitals were rated average with three stars, 58 got two stars and 35 got one star.

The average hospital score for the District of Columbia was lower than New York’s, as were those of Puerto Rico, Guam, and the Virgin Islands.

New York ranked low despite having one of the most expensive health-care systems in the U.S. Its per capita health-care spending ranked sixth among states as of 2012. As the Empire Center reported two weeks ago, its employer-sponsored health insurance premiums rose to second-highest in the country in 2015.

Results from the CMS rating system differed from previous hospital scorecards by U.S. News & World Report and others, giving higher marks in some cases to smaller, lesser-known institutions than the famous names.

Of the 12 four-star institutions in New York, for example, only two were among the traditionally elite hospitals of Manhattan: New York-Presbyterian and NYU Hospitals Center.

A bright spot was the city of Rochester, where all four of the hospitals rated received either three or four stars.

CMS said it lacked sufficient data to issue ratings for 25 of New York’s hospitals, including all of its Veterans Affairs hospitals. Hospitals specializing in cancer treatment, including Memorial Sloan Kettering in Manhattan and the state-owned Roswell Park in Buffalo, were exempt from the star-rating system.

Hospital officials in New York and across the country criticized CMS’ decision to issue star ratings. A spokesman for the Healthcare Association of New York State, a lobbying group for hospitals, told the Gannett News Service that the new report “oversimplifies the complexity of delivering high-quality care, uses flawed measures, fails to adjust for socio-demographic factors, and uses a methodology that cannot be replicated by hospitals or outside organizations.”

An analysis by Kaiser Health News confirmed that safety net and teaching hospitals tended to score lower on average.

However, both Mississippi, which is the nation’s poorest state, and Massachusetts, with a concentration of teaching hospitals, outperformed New York in the report card.

UPDATE: Here is a detailed response from Kenneth Raske, president of the Greater New York Hospital Association, representing 160 hospitals in the New York City metropolitan region. (The city’s hospitals were lower-scoring than the state as a whole in the federal report card, with its 38 rated hospitals averaging 1.68 stars.) Raske’s response raises tough questions about CMS’ methodology.

The hospital industry is justifiably angry at the Centers for Medicare & Medicaid Services (CMS) for posting its overall hospital star ratings on the Hospital Compare website because the results have little face validity.

This is primarily because CMS measures only very routine aspects of care, completely ignoring the world-class tertiary care that distinguishes New York hospitals. In addition, CMS provides no risk adjustment for social, economic, and demographic challenges that affect a disproportionate number of hospitals in New York, and CMS inappropriately gives equal weight to clinical outcomes and patient experience surveys.

For example, data in the new report card show that New York hospitals have among the lowest mortality rates in the country. But this is masked by readmission rates that appear too high because CMS fails to risk adjust for socio-economic challenges, and patient survey results that appear too low because CMS makes no allowance for the impact that chronically underfunding safety net hospitals has on patient experience.

Moreover, the outcomes for very small hospitals are not real because CMS reports national average results instead of actual results when volume is too low be reliable. Indeed, among the best-performing (“5-star”) hospitals in the new report card, roughly 60% have fewer than 100 beds, 60% have virtually no poor patients, one-third have no emergency room (the portal for poor and uninsured patients), and half are missing data for at least one key element of care.

We will continue to partner with the American Hospital Association in urging CMS to develop a more fair and accurate ratings system.