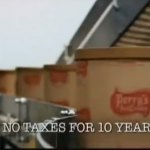 After seven months of stalling, the Empire State Development Corporation (ESDC) has finally responded to the Empire Center’s request for a breakdown of spending on the “Start-Up NY” advertising campaign.

ESDC today sent us a single-page summary of nearly $35 million in committed spending to promote Start-Up NY, which provides full exemptions from state personal and business income taxes to selected firms that locate on or near college campuses.

The bulk of the money — $27.8 million — was allocated for television airtime in both national and statewide markets. Other spending included:

Most of the money would be paid to the advertising firm of BBDO.

Start-Up NY ads were the largest component of more than $161 million spent by the state on advertising and promotional campaigns over the past two years, according to data provided to Gannett News Service after a year-long delay by ESD. The expenditure breakdown provided to the Empire Center fleshes out details of Start Up NY campaign spending missing from the response to Gannett, and can be found in table format here.

ESD sent the information to Gannett, Newsday and the Empire Center two days after Governor Andrew Cuomo was asked at a Rochester editorial board meeting about the agency’s failure to respond to such requests, of which he claimed to be unaware. It also was a day after New York Daily News columnist Bill Hammond aimed some stinging criticism at ESD’s foot-dragging. Recalling Cuomo’s 2010 campaign promise to make the state government the most transparent and accountable in history, Hammond wrote:

That might be one of the most-quoted statements Cuomo has ever made – because it comes up in all the stories about his administration delaying or denying requests for public information.

Clearly the information provided to Empire Center and to Gannett did not take months to compile.

If New York is truly “open for business,” it’s not yet demonstrated by employment figures, which show New York creating jobs at a slower pace than the nation as a whole.

By the way, one frequently-aired commercial for Start-Up intersperses shots of New York scenery and trendy tech stuff with footage of two guys rolling tires across the floor of what appears to be a tire warehouse, the assembly line and workers at Perry’s Ice Cream, and a man taking a bicycle from a rack full of bicycles.

Such businesses would seem unlikely to qualify for Start-Up NY, whose benefits are limited to new or expanding firms whose activities “support the academic mission of the college or university with which they hope to work.”