New York’s pandemic recovery has trailed far behind average payroll job growth in 48 of the 49 other states since early 2020, according to latest employment statistics.

As detailed below, while New York City was hardest hit by the Covid-19 outbreak and its aftermath, the slow recovery isn’t just a downstate phenomenon. All but one of upstate New York’s metro areas also have regained jobs at a slower pace than the national average since the end of 2019.

And while the state’s unemployment rate has continued to decrease—falling below the nationwide rate in regions outside New York City—this is mainly because the labor force is shrinking faster in most New York metros than in the nation as a whole.

In February 2020, the month before New York City became the ravaged epicenter of the nation’s Covid-19 outbreak, statewide private employment in New York hit a new all-time high of 8.33 million jobs. Over the next two months—mainly in April, following broad business lockdowns and other restrictions ordered by then-Governor Andrew Cuomo—the Empire State lost 1.9 million private-sector jobs, a sickening drop of 23 percent. Excluding New York State, employment in the rest of the nation dropped by 8.3 million jobs, or 15 percent, during the same period.

Fast-forward to the end of 2021, a full 21 months after the COVID-19 outbreak, reflecting business conditions early in the Omicron variant outbreak. As of December, seasonally-adjusted private employment in New York was still 8 percent (665,000 jobs) below the February 2020 level.

December’s estimated New York private employment total of 7.67 million jobs was still lower than in any month since June 2014. By comparison, the nation as a whole was just 2 percent short of its February employment level—and 9 percent above its mid-2014 jobs count.

Comparing all 50 states, as mapped below, only tourism-dependent Hawaii was further below its pre-pandemic employment peak than New York as of December. Neighboring Connecticut, Massachusetts and New Jersey—which also experienced severe Covid outbreaks—were closer to recovery with employment totals ranging from 3.7 percent to 4.3 percent below their February 2020 levels, while Pennsylvania was still 4.7 percent below its pre-pandemic mark. Seven states, including Texas, already had recovered to private employment levels beyond the early 2020 benchmark; six others, including Florida, were within 1 percent of full employment recovery.

Measured on a year-to-year basis, New York’s employment shortfall remains concentrated in New York City and its suburbs, as illustrated in the table compiled by the state Labor Department.

Even before the pandemic, job growth in the 50 counties of upstate New York was sluggish by national standards. Upstate’s low-growth pattern has continued since the pandemic, as shown by the chart below (which necessarily relies on non-seasonally adjusted numbers, since seasonal adjustments are not computed for counties outside New York City). 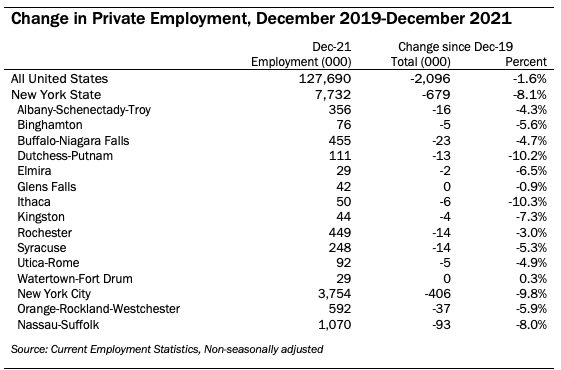 Watertown-Fort Drum, bolstered (presumably) by defense-related spending and military employees, is the only metro area of the state to have pulled back to its pre-pandemic employment level (up 100 jobs, actually), while Glens Falls is the only other area to be closer to full recovery (at 0.9 percent) than the national average (still 1.6 percent below two years earlier, as measured by December non-seasonally adjusted data).

The unemployment rate–which is based on a different survey than payroll jobs, and focuses on the residence of the workers, as opposed to the location of employers. As shown in the state Labor Department summary released yesterday, the unemployment rate has dropped in every region of the state compared to a year ago. The statewide rate of 5.1 percent remains notably higher than the nationwide rate of 3.7 percent—but this is overwhelmingly driven by much higher joblessness in New York City. Outside New York City, every metro and non-metro area of the state had unemployment rates below the national level. 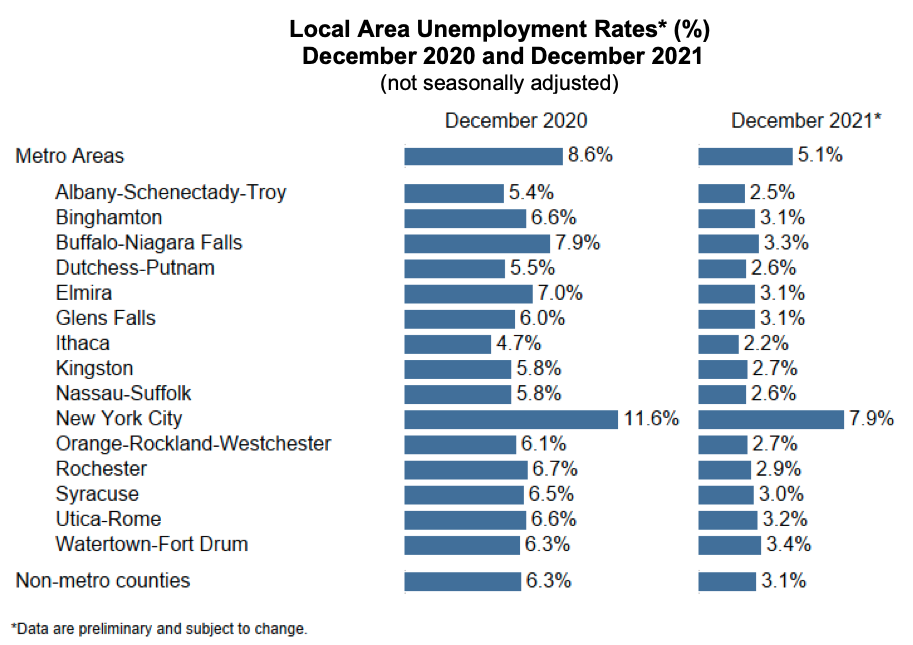 However, the lower rate does not mean more people are working; in fact, employment as measured by the Current Population Survey is down 453,000 from December 2019. Instead the unemployment rate is lower because the state’s labor force—people available for and seeking work—has dropped by 328,400, or 3.5 percent. This is more than double the 1.6 percent decrease in the nationwide civilian labor force, according to federal Bureau of Labor Statistics data.

On a regional basis, comparing preliminary December figures for 2019 and 2021, there were labor force declines of more than 4 percent in Central New York, the Mohawk Valley, the Southern Tier and Western New York, as well as in the Hudson Valley and Long Island. Only the Capital Region (-2 percent) and the Finger Lakes area (-1.7 percent) labor force decreased closer to the national average for the period.