On a year-to-year basis, the state gained 103,900 private-sector jobs in January—a growth rate of 1.3 percent at a time when the U.S. as a whole was growing by 2.1 percent, according to the state Labor Department’s monthly jobs report.

New York City accounted for 86,400 jobs of the net new jobs during the period (+2.2 percent). Adding the net job gains of 6,000 on Long Island and 4,800 in the lower Hudson Valley brought the downstate (12-county MTA region) total to 97,200 — or 93 percent of the reported statewide gain as broken down by metro areas. (There is a negative residual not counted in those totals).

Upstate, the only large metro areas with private jobs gains above the statewide average were Albany-Schenectady-Troy (9,500 jobs, or +2.7 percent) and Syracuse (6,100 jobs, +2.4 percent). The only other upstate areas with above average private employment increases were Kingston, Glens Falls and Utica-Rome, small labor markets that have yet to produce sustained growth during the post-2010 recovery. All other upstate areas grew any less than a percentage point—including the largest, Buffalo-Niagara Falls and Rochester, which turned in mediocre year-year gains of 0.4 and 0.2 percent, respectively.

The regional difference in job creation rates reflected in the latest data is even more pronounced than the longer-term tale of two states recounted here.

Broken down by industry, as shown below, roughly 60 percent of January’s net year-year  employment gain in New York was concentrated in the education and healthcare sector, in which government subsidies play an outsized role. 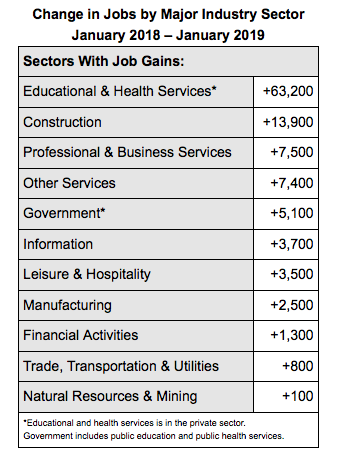 As illustrated below, private sector employment declined during this period in six upstate counties—Allegany, Cayuga, Chautauqua, Cortland, Otsego and Seneca. The job count was unchanged in Hamilton, Lewis, Montgomery and Tompkins counties. 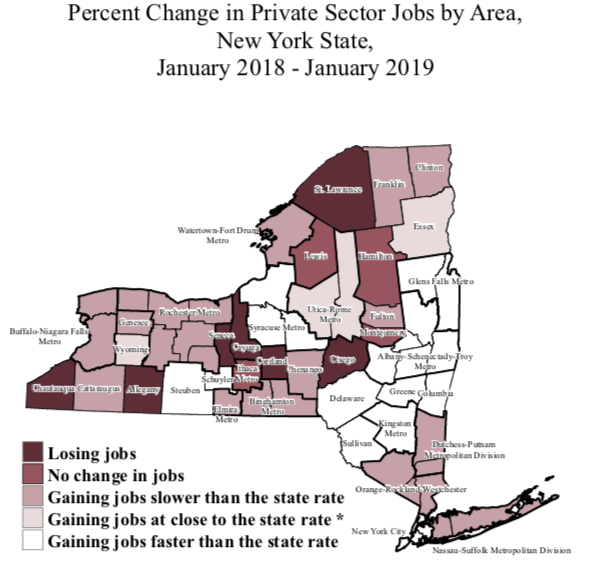