New York City’s five municipal public pension funds ended their 2020 fiscal year with a net investment gain of 4.44 percent, well below their 7 percent assumed rate of return. That shortfall, reflecting the pandemic recession and its impact on financial markets, is expected to drive up the city’s annual tax-funded pension costs by up to $200 million within the next three years.

The pension funds’ performance was disclosed by Comptroller Scott Stringer last week in his report on the city’s adopted budget for fiscal 2021, submitted before the annual meeting of the state Financial Control Board.

Because it is used to “discount” the pension funds’ projected future liabilities, the assumed rate of return on pension investments—also known as the “actuarial interest rate,” or AIR—is the crucial determinant of how much money must be extracted annually from city taxpayers to cover promised (and constitutionally guaranteed) benefits to city retirees in decades to come. The higher a pension fund’s discount rate, the lower the contribution required to fully cover liabilities—but when average returns fall short of the market, contributions rise to make up the difference.

Stringer’s report said the FY 2020 earnings shortfall would boost the city’s annual pension contribution by $66 million in FY 2022, $133 million in FY 2023 and $200 million in FY 2024. It could have been worse: the average return for all public pension funds with fiscal years ending June 30 was 3.2 percent, according to a Wilshire Associates estimate reported by the Wall Street Journal. Among New York City peer pension funds with the same fiscal year, California’s giant Calpers system reported a return of 4.7 percent, while the California teachers fund reported a gain of 3.9 percent.

New York City’s five pension plans (like most of their counterparts across the country) invest 60 to 70 percent of their assets in domestic and global corporate equities markets. The reliance on higher-risk assets worked well through mid-February of this year, when the S&P 500 reached an all-time high. But as COVID-19 spread out of China into Europe, stock prices dropped a sickening 33 percent between Feb. 19 and March 23—the worst crash since the Great Recession.

The pension contribution increases projected by Stringer look tiny in the context of total projected pension FY 2021 contributions of more than $10 billion, but they add to an already growing tide of red ink following the coronavirus crash in city revenues. And it could get worse, depending on how long it takes for the economy to recover from the record decline in business activity caused by coronavirus lockdowns. While some Wall Street forecasters see further improvements in stock prices, others say the markets are too frothy and likely to drop again—which, given the pension funds’ continued heavy bet on stocks, would drive pension costs higher.

New York City pension fund returns have experienced some wild ups and downs since the turn of the century, which all works out to a compound average annual return of 5.9 percent from 2000 through 2020, as illustrated below. 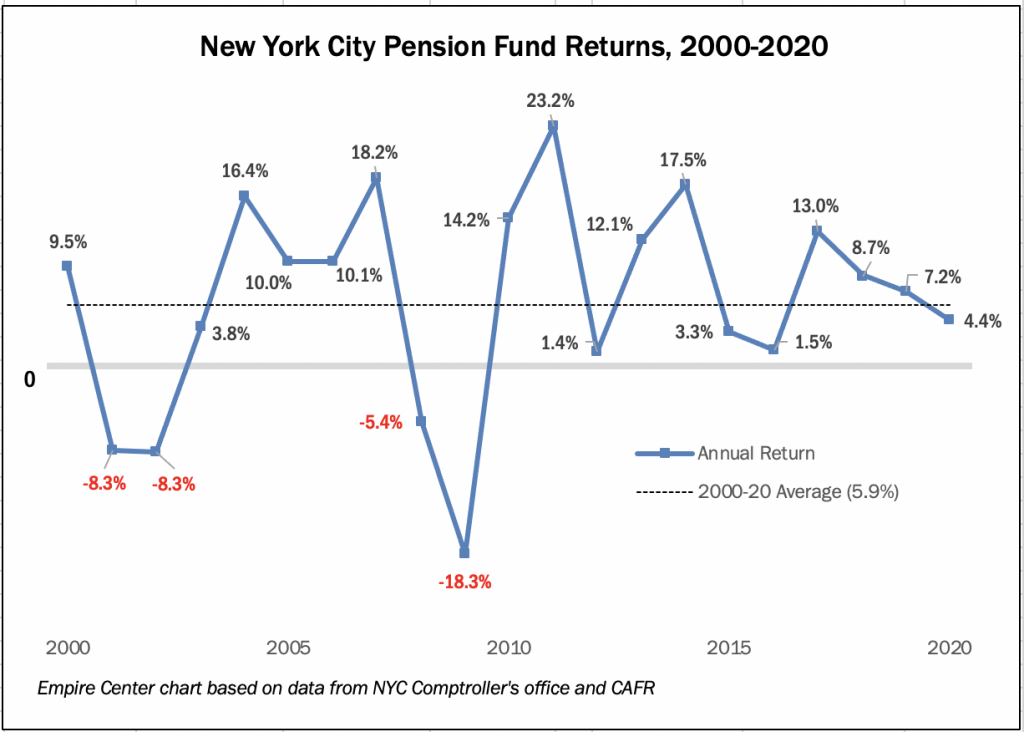 As of fiscal 2019, the latest year for which an estimate is available, the city pension funds had a combined net liability of $43 billion—meaning they were $43 billion short of what they’d need to meet all obligations vested as of last year. When the 2020 Comprehensive Annual Financial Report (CAFR) is issued in the next month or so, that number will be larger. But, if anything, it will still be misleadingly low—since it is based on the assumption of continued annual returns averaging 7 percent, which former Mayor Mike Bloomberg once compared to a promise from Bernie Madoff. Applying a 6 percent discount rate, the 2019 liability would have exceeded $66 billion, the city reported last year.

The other big New York State pension fund with a June 30-June 30 fiscal year is the New York State Teachers’ Retirement System (NYSTRS). But NYSTRS doesn’t release its pension fund returns until its October board meeting. Based on the city’s experiences and the national pattern, NYSTRS also is likely to fall short of its projected 7 percent rate of return.