The state Teachers’ Retirement System (NYSTRS), which covers public educators outside New York City, recently reduced its rate of return assumption from 7.5 percent to 7.25 percent. The change is effective immediately for purposes of valuing pension fund assets and liabilities.

Under government accounting standards, public pension funds such as NYSTRS are allowed to use their assumed rate of return (RoR) as a discount rate on future pension liabilities—i.e., the constitutionally guaranteed benefits they have promised to all current and vested future retirees.

When the RoR is lower—i.e., when the pension fund expects to earn less on the money it collects from employers—pension contributions must be higher. Therefore, as a result of the latest RoR change, the NYSTRS contribution rate applied to 2017-18 payrolls will increase for the first time in four years, from 9.8 percent to between 10.5 percent and 11 percent of payroll, according to the system’s latest administrative bulletin.

What impact will the NYSTRS rate change have on taxpayers? Extrapolating from payroll data in the latest NYSTRS annual report, the increase in required pension contributions will add roughly $130 million to $195 million to school budgets. (In accounting terms, these costs are accrued in 2018-19 but won’t be payable until the fall of 2019, in the 2019-20 school budget year.)

A Gannett News Service report on the NYSTRS move was headlined “NY Schools Just Got Bad Fiscal News,”  but the real story isn’t quite so simple.

While adding to budgets, a lower assumed RoR and a higher employer contribution rate will at least slightly ameliorate the fiscal shock that will follow the (inevitable) next Wall Street downturn. That makes the rate change good news—but not good enough. By the standards applied to corporate pension funds, NYSTRS contribution rates are still too low.

At 7.25 percent, NYSTRS will still be counting on a higher rate of return than assumed by actuaries for the New York State and Local Retirement System and the New York City pension funds—which peg their RoRs and discount rates at 7 percent. In fiscal year 2017, which ended June 30, the stock market boom lifted the NYSTRS return on investment to 12.5 percent, following subpar returns the previous year.  But as the disclaimers in public investment offerings put it, past results are no guarantee of future performance. Last year’s gain could easily be wiped out—and then some—by a stock market swoon, as happened twice in the past 16 years.

Over the the long run, assuming a return of 7 percent is, as former Mayor Michael Bloomberg put it a few years ago, “indefensible” by real-world standards. (“If somebody offers you a guaranteed 7 percent on your money for the rest of your life, you take it and just make sure the guy’s name is not Madoff,” Bloomberg said.)

In fact, according to its latest actuarial analysis (pp. 8-9), NYSTRS expects a 30-year average annual return of 6.6 percent. The real “bad news” is that New York school taxpayers remain exposed to a greater than 50-50 risk that the pension fund won’t earn enough to prevent higher catch-up contribution rates in the future.

Meanwhile, in the real world…

Most private-sector actuaries agree that pension liabilities (especially when reflecting constitutionally guaranteed benefits) should be discounted using a much lower, risk-free “market rate” of interest, such as the yield on U.S. Treasury bonds. This would require significantly higher pension contributions—e.g., probably closer to 20 percent for NYSTRS employers. Of course, this would lead to greater public pressure to reform the system. It’s unsurprising that teacher unions and managers both prefer an accounting measure that reduces apparent pension funding costs. (For an in-depth explanation of public pension funding, see page 7 of this recent Manhattan Institute report.)

The property tax cap contained an important loophole: a “cap” on increases in NYSTRS contributions. The tax cap law provides that, to the extent that teacher pension contributions rise more than two percentage points in any given year, the amount necessary to pay the added contribution is not counted against the maximum allowable tax levy. In 2013-14, the second year after the tax cap took effect, the pension exclusion was a major factor in boosting allowable school tax levy limit to an average of 4.6 percent. The amount excluded from the tax cap could equal up to 2.41 percent of base TRS salaries.

The pension limit in the tax cap law didn’t work in reverse, however: when contributions dropped back below the 2013-13 level, the unneeded money was not returned to taxpayers. As of 2017, the one-time pension exclusion dating back to 2013 is allowing school districts to collect at least $390 million more in taxes to cover pension contribution billings that are $1 billion lower than would have been raised by the 2013-14 contribution rate.

Actuarial assumptions aside, the primary drivers of teacher pension costs are the salaries on which pensions are based. The chart below tracks the NYSTRS school district salary base and average salaries for full-time NYSTRS members since 2002. As shown, after flattening in the wake of the Great Recession, base salaries rose 7 percent between 2013-14 and 2016-17, from $14.8 billion to nearly $15.9 billion. The average salary of full-time NYSTRS members reached $79,813 in 2015-16, the latest year for which an estimate is available, up from $57,308 in 2001-02. 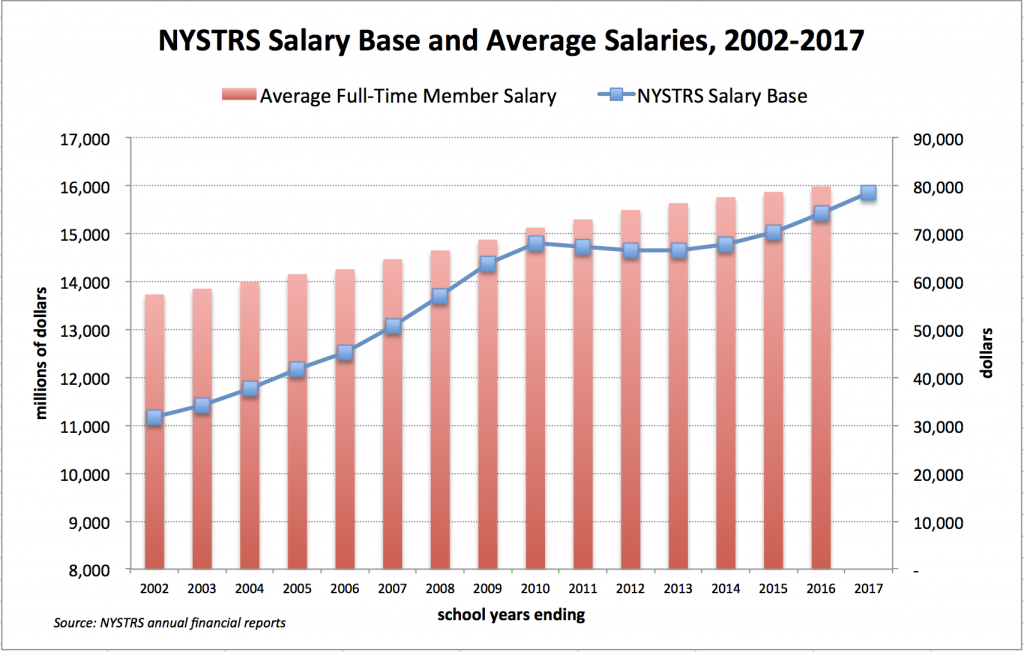