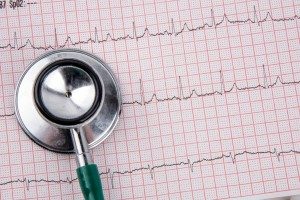 The growth of Obamacare-related health coverage in New York slowed to 3 percent over the past year, as surging enrollment in the Essential Plan and Child Health Plus was offset by declining signups for commercial plans and Medicaid.

It was the state’s smallest annual increase in the combined enrollment of the programs since President Obama’s Affordable Care Act took full effect in 2014.

The numbers suggest that the shrinking of New York’s uninsured rate, which went from 10 percent in 2013 to 5 percent last year, may be coming to an end. If not for strong growth in the Essential Plan – the funding for which is in jeopardy – total ACA-related enrollment would have declined over the past year.

Earlier this year, the state’s ACA exchange, known as the New York State of Health, reported that it had enrolled 3.6 million people for coverage as of January 31, up 28 percent, or about 800,000, from the year before.

However, those figures left out the large but declining group who signed up for two programs, Medicaid and Child Health Plus, without using the exchange. The 28 percent increase mainly reflected a shift in bureaucratic procedure rather than an expansion of coverage.

Now, thanks to updated enrollment counts from the state Health Department and the federal Centers for Medicare & Medicaid Services, the underlying trends can be better tracked. 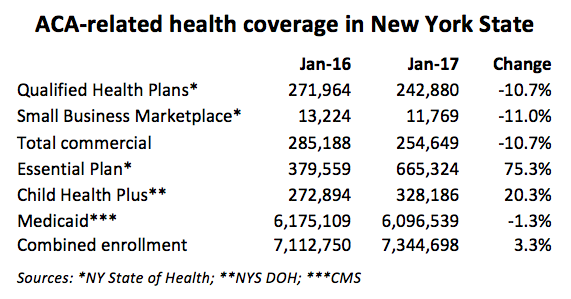 As seen in the chart, the fastest-growing program was the Essential Plan, where enrollment increased by 75 percent. This government-funded option, launched in 2016, is aimed at people with incomes up to 200 percent of the federal poverty level ($24,120 for an individual). The premiums are either free or $20 a month, or depending on income, and there are no copayments or deductibles. The program relies heavily on federal aid that is on the chopping block in Washington.

Commercial coverage, meanwhile, dropped by 11 percent – possibly due in part to “crowding out” by the Essential Plan. Even with heavy tax subsidies available through Obamacare, commercial plans come with higher premiums and out-of-pocket expenses than the Essential Plan.

Child Health Plus, which covers low-income children, saw 20 percent growth in January after several years of declining or flat enrollment. What drove the sudden turnaround in a long-standing program is not immediately clear.

The state’s Medicaid program, meanwhile, declined by just over 1 percent, a sign that a burst of enrollment under Obamacare has effectively reached all of the eligible population. The program peaked at 6.5 million in October 2015 and now stands at 6.1 million, or just under one-third of the state’s population.

This analysis does not include people who enrolled in commercial coverage outside of the exchange, statistics for which are not readily available.

Comparisons to pre-Obamacare enrollment are difficult to make, because some enrollees switched from private coverage or other state programs that no longer exist. Overall, the state’s uninsured rate dropped from 10 percent in 2013 to 5 percent last year — which corresponds to a coverage expansion of about 1 million New Yorkers.