Thanks mainly to a pandemic-driven boost in its already high outflows to other states, New York has just suffered its largest single-year population loss ever—and the worst, in percentage terms, of any state in the past year—according to Census Bureau estimates released today.

As of last July 1, the Empire State’s total population had dropped by 319,020 residents, or 1.6 percent, below the Census Bureau’s “estimates base” headcount of 12 months earlier, during a period when the total U.S. population increased at the slowest annual pace on record (just 0.1 percent, a gain of 392,665).  The population decline wiped out nearly half of the Empire State’s cumulative population gain of 823,147 people during the previous decade, pulling the statewide total back to below 20 million.

New York’s population decrease as of mid-2021 was due mainly to its net domestic migration loss of 352,185 residents—meaning 352,185 more people moved out of the state than moved in during the previous 12 months. This shattered all out-migration records, exceeding New York’s record annual migration losses during the late 1970s.

With international travel tightly restricted by pandemic rules, net foreign immigration to New York decreased during the period to just 18,860, the smallest number in at least 60 years. As a result, combining domestic outflows and foreign inflows, the state experienced a total net migration decrease of 333,878. Offsetting an elevated death count, which reflected the state’s exceptionally high COVID-19 casualty toll, a decrease in births during the year gave New York a small “natural increase” of 18,503 residents.*

The census estimates confirm a pandemic-driven trend informally tracked by news media outlets and real estate research firms based on address changes and cell phone movements, but the data are nonetheless striking in an historical context, as illustrated below. 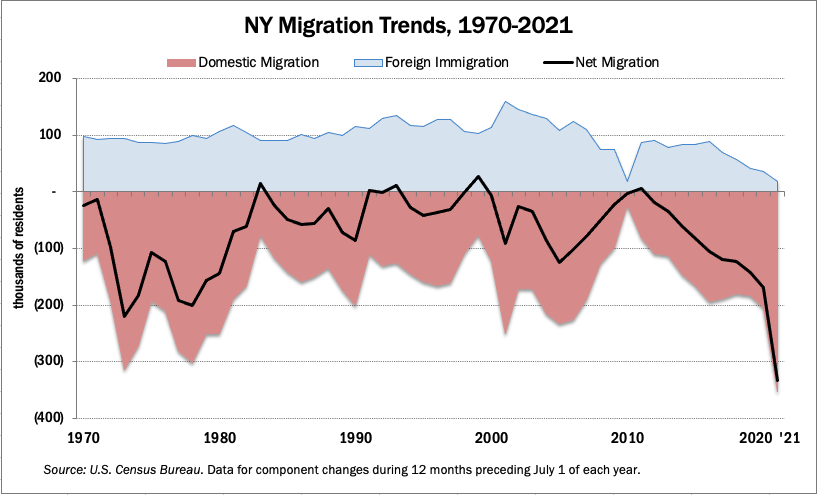 Which areas of New York accounted for most of this loss?  The answer is almost certainly New York City, but official specifics won’t be available until the Census Bureau’s estimates of population changes for counties and municipalities are released in March.

New York population losses to other states were already mounting in the years leading up to the pandemic, and a slowdown in foreign immigration had brought the net migration decrease to levels rarely seen since the 1970s. But as shown above, the post-pandemic change was almost literally a chartbuster.

In absolute terms, whether measured from July 1, 2020, or from the decennial census count as of three months earlier, New York’s net domestic loss in the pandemic era has been exceeded only (slightly) by California’s. But relative terms, New York has been far and away the biggest loser, with a net domestic migration outflow equivalent to 1.7 percent of its July 1, 2020, estimated population. 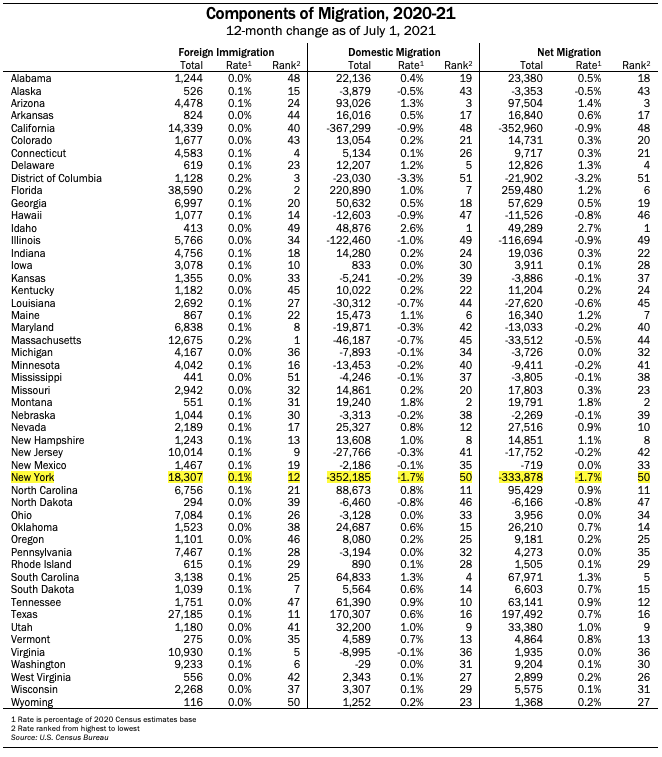 Among 16 other states with net domestic outflows during the period, Illinois was runner-up to New York with a loss of 1 percent, followed by California with a drop of 0.9 percent. Among New York’s neighboring states, Massachusetts and New Jersey had net domestic migration losses of 0.7 percent and 0.3 percent, respectively, while Pennsylvania experienced no net migration change and Connecticut had a small estimated population gain during the year ending July 1.

The migration loss accounted for almost all of New York State’s total population decline—which was much larger in percentage terms than those of 15 other states that also experienced decreases in their total populations in the last year.

*The originally published version of this blog mischaracterized the birth total as an increase and erroneously reported the natural increase as measured by the Census Bureau a slightly longer period.