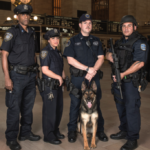 To fight crime and fare evasion in New York City subways, the state Metropolitan Transportation Authority plans to hire 500 more officers for its police department—an unprecedented expansion of what’s already one of the largest police forces based in New York State.

As of 2018, the MTA Police employed a total of 773 officers, including new hires and officers who retired or otherwise left the payroll during the year, according to records posted at SeeThroughNY, the Empire Center’s transparency website. MTA Police pay averaged $131,959, including average overtime of $34,936. And the number of MTA Police officers was the highest in at least six years; in 2013, there were 99 fewer total officers employed by the department.

As previously detailed here, MTA Police are the transportation authority’s highest-paid group of workers—drawing even higher average overtime than employees of the LIRR, whose overtime excesses became the focus of a major MTA investigation after they were revealed by the Empire Center in April. Based on salary data posted at SeeThroughNY.net, the chart below compares the MTA Police to four other large agencies: the New York Police Department (NYPD), the New York State Police, and the Police Department of the Port Authority of New York and New Jersey. 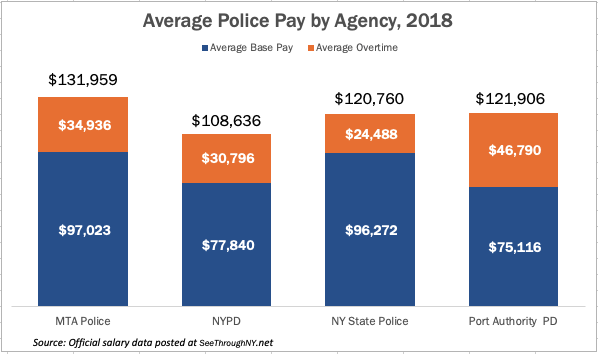 From a broader regional perspective, MTA Police compensation is not out of line with police pay in the communities served by Metro North and the LIRR. As of 2018, average MTA Police pay ranked in the upper half (54th out of 137 agencies employing a total of 10,524 officers) in the seven suburban New York counties, although it was below the Hudson Valley and Long Island weighted regional average of $138,343. (For county and municipal agencies in the comparison, this figure was gleaned from state pension fund data, which does not break out the overtime component for all agencies).

Other than the Port Authority police and the NYPD, the only New York-based police agencies employing more uniformed officers than the MTA were the Nassau County and Suffolk County Police Departments, which each had more than 2,400 employees as of fiscal 2019. Officers in those agencies pulled down average pay of $136,762 and $166,703, respectively.

Officers of the MTA Police are most visible to the general public at Grand Central Terminal and Penn Station, which also are patrolled by New York State Police troopers and anti-terrorist National Guard units. However, MTA Police don’t routinely patrol most commuter trains or local commuter rail stations—which would require a much larger force if security concerns demanded it (which, as regular commuters can attest, they don’t).  In practice, their duties consist primarily of preparing for and responding to rail emergencies, such as (thankfully, infrequent) derailments and collisions; responding or investigating crimes on commuter rail rolling stock and property; and ensuring the security of the hundreds of Metro North and LIRR stations and rail yards, including those of Metro North’s New Haven line in Connecticut. They also have their own counterterrorism unit.

It’s not uncommon for regional commuter rail systems to have their own police departments. The Boston, Chicago, New Jersey and Philadelphia transit authorities all do. Serving a national network, so does Amtrak—and, of course, so does the Port Authority. While commuter rail lines run through communities served by numerous local agencies, the premise behind the creation of transit authority police agencies was apparently a perceived need for specialized, rail-focused security services across multiple jurisdictions.

For New York State, the issue at hand is less why the MTA Police exist at all than why the financially strapped state agency has chosen to devote scarce resources to vastly expanding its already expensive police force to assume a portion of the underground law enforcement responsibility now assigned to NYPD. The MTA’s plan is a step toward recreating the old Transit Police—except, this time, the MTA rather than the city will be footing the bill.

The answer seems to be that the MTA board (read: Governor Cuomo) does not trust the city politicians who oversee the NYPD to allow effective enforcement of laws against turnstile-jumping, vagrancy and assorted other “broken windows” offenses in the subway system—even though, just a few months ago, Cuomo and de Blasio publicly announced joint support for a crackdown on fare evasion and assaults on subway workers.

In taking responsibility for the more complex and variable law enforcement challenges of an often crowded and unruly subway system, MTA Police are sure to experience growing pains—not to mention added risks of miscommunication and lack of coordination with the NYPD, whose officers will continue to patrol the subways as well. In fact, how this all will unfold still seems unclear, as reported by the Streetsblog account of a budget presentation at last week’s MTA board meeting:

Asked who came up with the need for 500 police exactly, [MTA Chair] Foye merely told reporters “that number was developed with the MTA police department and the agency,” and that the MTA also needed the police for the commuter railroads, though Foye would not say where the new officers would be deployed if they were hired.

Indeed, there’s a “pay no attention to that man behind the curtain” element of the current debate over the MTA’s police expansion bid. Foye, for example, said that the officers involved in this summer’s Fare Evasion Task Force blitz — which featured 200 from the NYPD and 300 reassigned MTA cops — are continuing their work. But then MTA spokesman Tim Minton said those NYPD and MTA Police would go back to their original assignments once the 500 new cops joined the MTA force — unless, of course, they don’t.

With the hope of collecting an added $200 million in fare revenues now avoided by turnstile jumpers, the MTA is preparing to budget an estimated $249 million over four years for 500 cops, which works out to an average of nearly $125,000 a year per officer. Given a seven-step base pay scale that starts at $42,000 and reaches $100,168 after seven years, the budget seems to assume that much of the new subway force will consist of more senior officers earning the usual gobs of overtime.

The latest MTA Police Benevolent Association contract, posted exclusively at SeeThroughNY.net, expired last October. Like most police bargaining agreements, it is replete with references to “overtime” (a word that appears 142 times in a 99-page document), including provisions designed to ensure that officers with the greatest longevity get first dibs on extra-pay shifts.

If the MTA is determined to forge ahead with a police hiring binge, it should aim for labor contract changes that cut down on overtime—the same objective it has in talks with its other unions.