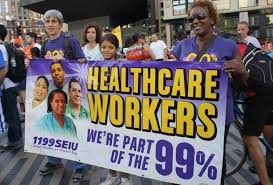 Two pension funds affiliated with 1199 SEIU, the state’s largest and most influential union for health-care workers, recently disclosed that they are in “critical” status due to funding or liquidity problems for an 11th straight year.

The two plans’ fiscal woes date back to the aftermath of the Great Recession in 2009, when stock market losses took a toll on the assets of many pension systems. Since then, stocks prices have climbed at a historic pace and the number of fiscally troubled pension plans has dropped by more than half.

Funds in critical status may reduce adjustable benefits and are barred from issuing lump-sum distributions in excess of $5,000.

There are a total of five 1199-affiliated pension funds operating in New York, with $11 billion in assets and 421,000 participants, both active and inactive or retired. The 1199SEIU Health Care Employees Pension Fund, serving 264,517 current and former hospital workers, was the sixth largest in the nation as of 2015.

Based on their 2017 filings, all show signs of common ailments affecting defined-benefit pension systems, including low ratios of active to inactive members and substantial unfunded liabilities (see chart). The issues are similar to those affecting New York’s largest construction union pension plans, as E.J. McMahon blogged in this space last week.

For the five 1199 plans taken together, 44 percent of members are actively working – and thereby generating employer contributions to their respective pension systems.

By the funds’ own actuarial standards – which assume generous rates of return on investment, ranging from 7 percent to 7.75 percent – the systems’ assets are only 81 percent of the amount needed to guarantee future benefits.

Using the more conservative standard spelled out out in the Retirement Protection Act of 1994, the five systems are only 41 percent funded – leaving an unfunded liability of $16.2 billion.

If they are to make good on their commitments to retirees, the plans must ultimately close that gap through a combination of investment returns and contributions from their 588 participating employers, which are hospitals, nursing homes and other health-care providers across the state.