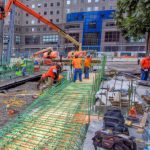 There is, indeed, plenty of misinformation wafting around this issue—but virtually all of it originated in the union camp.

The crowning whopper is the common use (by unions and business groups alike) of the outmoded phrase “prevailing wage” to describe pay levels that are neither prevailing nor limited to wages. State law requires contractors on public works projects in New York to pay their employees the combined hourly wage and benefit levels required by labor contracts—although, according to the latest Census estimates, union deals cover barely 21 percent of construction jobs in the state.

With the clock running down toward the June 19 adjournment of this year’s legislative session, unions are lobbying for a bill that would expand this requirement beyond currently defined public works (i.e., buildings, infrastructure and other facilities directly owned by government agencies, school districts and public authorities) to include projects financed in part by state and local government economic development grants and tax incentives.

Advocates of the change say it’s all about promoting “fair” wages, or as Governor Cuomo has put it, “good jobs that pay a decent living,” as if non-union merit shops weren’t already paying good wages for skilled construction workers. What the unions don’t say is that this campaign is also, if not primarily, about the unions’ increasingly urgent need to bail out their underfunded pension plans. 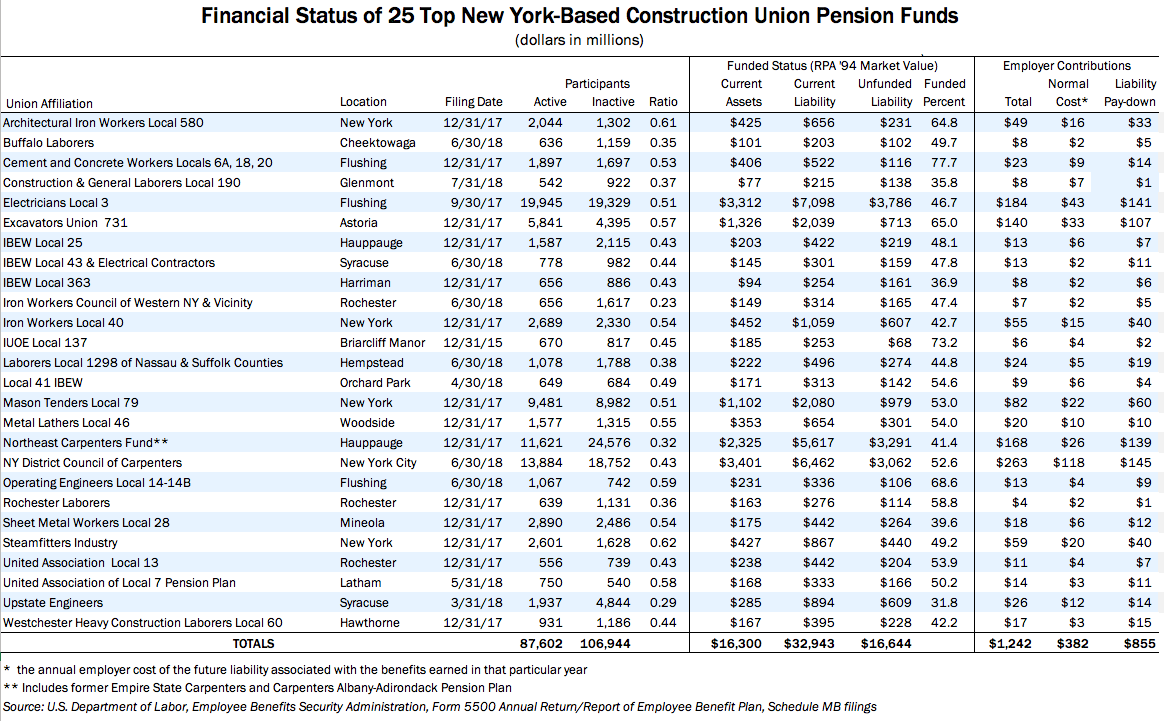 As detailed above, these union pension plans had $16.3 billion in current assets against liabilities totaling nearly $33 billion, when discounted using the market rate of interest prescribed by the federal Retirement Protection Act of 1994. Using this measure, also known as “RPA ‘94”, 13 of the 25 plans had funded ratios under 50 percent; that is, their assets add up to less than half what they will ultimately need to provide promised benefits to their plan participants. The plans’ total unfunded liabilities came to $16.6 billion.

Classified by the feds as “multi employer pension plans,” or MEPPs, the union funds are still trying o fill the enormous holes created by the 2008-09 stock market crash and financial crisis. Out of $1.2 billion collected from employers in their latest reported fiscal years, the funds calculate they needed only $382 million to cover the actuarial “normal cost” of newly accrued pension benefits for active workers. Fully two thirds of total pension contributions, a total of $855 million, went to the multi-year “amortized” cost of paying down past liabilities.

At the individual union level, this produces some eye-popping numbers. Take, for example, the well-compensated members of Laborers Union Local 1298 on Long Island. Based on an average contribution rate of $12.74 an hour, employers of Local 1298 members paid a whopping average of nearly $23,000 per active worker to the union’s pension fund in 2017.  Of that amount, only $4,545 was required to cover the “normal cost” of newly accruing pension benefits for those workers. Nearly $18,000 per worker was required to pay down the shortfall in the Local 1298 pension fund, which by RPA ’94 measure had assets valued at only 45 percent of its liabilities.

Compounding the problem for Local 1298 and several other sizable New York building trades unions is the the fact that most of their pension plan participants are already retired or otherwise inactive. The Local 1298 fund’s participant ratio of 0.38 means just 38 percent of the pension plan recipients are actively working and thus generating fresh employer pension contributions.

The Long Island-based Northeast Carpenters Pension Plan, which also covers many upstate union carpenters, is even more challenged. It has a participant ratio of just 0.32 and an RPA ’94 funded ratio of barely 41 percent. Small wonder, then, that these unions and others are working so hard to nail down what would amount to an entitlement. As things now stand, they don’t just need more members working and generating dues—they need to bill more hourly contributions to their pension funds.

But they can’t compete because their combined wages and benefits are so high—a total of $80 an hour for heavy/highway category. This includes $30 for benefits, which in turn includes $12.74 per hour for the pension fund.

But it’s not just a matter of competition within a given region. Some of these incentives are used to entice commercial and industrial developments that could be located anywhere in the greater northeast. Consider, for example, how wages for two common building trades in Long Island stack up to the state-mandated public works “prevailing wage” rates in northeastern suburban areas with comparably high costs of living.

If anything, the impact of a mandated union wage expansion would be even more severe in economically stagnant upstate New York, where virtually no major development occurs without some level of government tax incentive or subsidy. As it now stands, under current rules, construction employment (much of it government subsidized) has been a bright spot in the upstate economy in recent years, and construction workers  are well paid by private-sector standards, as The Business Council pointed out in a memo to the Legislature today. The expansion of the public works pay mandate would threaten to disrupt the already fragile region’s economy.

Lifting from my recent Newsday column on this subject:

New York’s prevailing wage law is a relic of the late 19th century, designed to protect local firms and workers from lower-cost competitors from other regions. What survives is an increasingly costly protection racket for a shrinking but still politically powerful labor cartel.

Instead of expanding the noxious impact of prevailing wage, Cuomo and the legislature should reform the law — so that prevailing wage actually means what it implies.

So, what would such a reform look like?  Simple: it would be based on the federal version of prevailing wage, the Davis-Bacon Act. The state Labor Department would sponsor a regular survey of pay levels for construction wages in every region of the state. It would then set the basic rate at the pay level that actually prevails across 50 percent of each occupational title. Hourly benefits would be similarly pegged to the average percentage level in that same group.

Unions and union contractors would be left to sort out their own, ultimately self-created pension fund problems. They might ultimately seek a direct federal or state bailout of those shortfalls—but they could no longer use “wage” laws as covers to fix those problems indirectly.