And speaking of debt: in its latest report on the newly adopted New York City budget, the state Financial Control Board says the city’s unfunded liability for “other post-employment benefits” (OPEB) could approach $100 billion in three years. As shown in the nearby chart, the city’s OPEB burden has been rapidly escalating since the number was first calculated and made public in 2006. 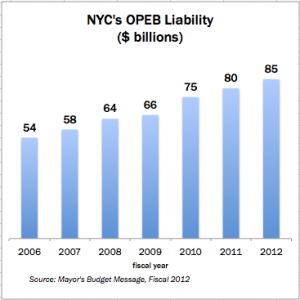 Employer-sponsored health coverage after retirement, common in the public sector, is available to only a small and dwindling number of private-sector workers, as noted in a recent post here on state labor agreements. New York City’s burden is especially heavy because (a) it offers relatively generous health insurance plans, and (b) it does not require its employees to contribute to their own coverage. The city would save $2 billion by 2015 if it reformed employee health coverage to require contributions by active and retired employees, the Citizens Budget Commission has estimated.  But that would require major concessions by municipal labor unions — which, under current city and state collective bargaining guidelines, are in a strong position to resist any change.

As of 2010, the combined unfunded OPEB liability for all levels of government in New York was estimated at $200 billion.  This is essentially the net present value of promises that state and local taxpayers have made to the people who work for them.  In theory, the only reason this is not counted as part of the total state-local debt burden is that, unlike bonded indebtedness, the retiree health obligation can simply be repealed or reduced by elected officials.   But this assumption fails to reckon with the recalcitrance of labor unions — or the meekness of public officials responsible for dealing with them.

In New York City’s case, as of June 30, 2010, the total value of what the city government owed to all its creditors — including bondholders and employees — came to $108 billion more than the value of what it owned (see p. 40 of the city’s 2010 Comprehensive Annual Financial Report).  This excess of liabilities over assets equates to what accountants call “balance sheet insolvency.”  In case you were wondering.