As New York and the Nation emerge from the depths of the Covid-19 pandemic and look to the future, many property owners are deciding whether and where to relocate their business or place of residence. Workplace flexibilities introduced during the pandemic are expected to have a lasting impact on the nature of work, providing many individuals and businesses more options and discretion in choosing where to locate.

A key factor in such locational decisions is typically the “all-in” property tax bill of jurisdictions under consideration—i.e. the cumulative property tax burden levied on the property by all levels of government. Residential homeowners need to be sure they can make ends meet after accounting for their entire tax bill; businesses need to make a profit after expenses—including all property taxes.

New York’s property tax rates are generally among the highest in the nation. Specific property tax burdens vary widely throughout the state, often even among neighboring jurisdictions.

The lion’s share of the property tax imposed on most locales in New York are the levies imposed by the local school district. (The Empire Center annually posts the school district property tax rates proposed for districts across the state for the upcoming year.)

But determining the effective property tax rate for a specific locale outside New York City requires adding up tax rates of at least three different jurisdictions—counties, towns or cities and school districts. Villages and special districts can also levy separate taxes. As a result, multiple combinations of property tax bills can be found in a single town.

To make it easy to compare property taxes across almost every locale in New York State, the Empire Center makes available an online Property Tax Calculator each year based on data reported annually to the Office of the Comptroller.[i]

View the Property Tax Calculator at SeeThroughNY.net/Benchmarking. Specific rates for individual locales statewide can be searched and compared using the calculator. This is illustrated in the screenshot below, which shows a side-by-side comparison of the property tax bill for two homes of identical value situated in different New York locales. 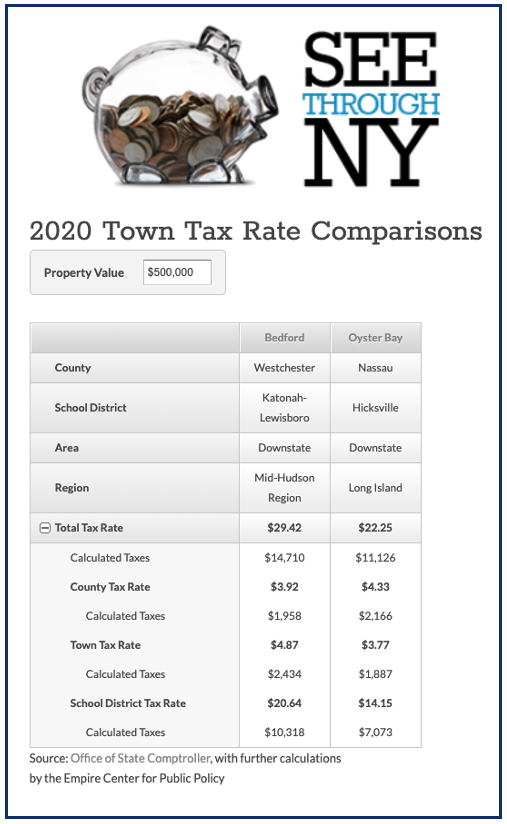 Focusing on the effective tax rate allows taxpayers and government officials to establish performance goals and benchmarks for their communities.

The specific locales with the highest and lowest property tax rates are unchanged from the year prior. Inhabitants of the village of Liberty in Sullivan County who live in the Liberty school district pay property tax of $60.72 per $1,000 in home value—a rate 16 times higher than that paid by residents of the town of Southampton in Suffolk County, Long Island who live in the Sagaponack School District, and are levied at a rate of $3.75 per $1,000.

The map below and the property tax calculator reflect taxes levied during each local government’s 2020 fiscal year. The map shows the average effective property tax in each region of New York, and the specific cities, towns and villages within each region with the highest and lowest rates.

[i] Nassau County and New York City impose different tax rates on different classes of property and are excluded from the calculations. In addition, taxes levied by independently governed fire districts are not included.