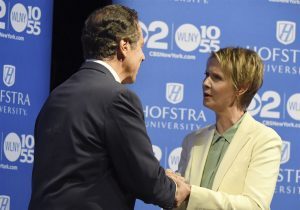 Gubernatorial candidate Cynthia Nixon cited a lot of statistics in favor of single-payer health care in her debate with Governor Andrew Cuomo on Wednesday, but most of them were confused, misleading or false.

Cuomo made questionable assertions of his own, but rightly framed the cost of such an overhaul as prohibitively high.

If enacted, it would automatically cover all state residents with no premiums, no copays or deductibles and no restrictions on choice of provider. It would be financed with a mix of existing funds spent on Medicaid, Medicare and other government programs, plus additional revenue from two new taxes on payroll income and non-payroll income.

A recent analysis by the RAND Corporation projected that financing the system would entail a tax increase of 156 percent. That is, the state would need to raise $139 billion per year on top of the approximately $90 billion it currently collects from all tax sources (not including federal aid). As the report acknowledged, its findings were based on iffy assumptions – including that the Trump administration would cooperate by allowing New York to integrate Medicaid and Medicare recipients into its new health plan. If those assumptions don’t pan out, the price tag would likely grow bigger still.

The bill has passed the Assembly four years in a row but has yet to come to a vote in the Senate.

Here is a fact-check of key claims from the two candidates. (A full transcript of the exchange is included below.)

“So the RAND Corporation also said that it [single payer] would be a tremendous savings for New York State.” (Nixon)

The RAND Corporation’s study estimated that the New York Health Act would reduce overall health spending by about 1 percent in the first year, rising to 3 percent in the 10th year. Those would more accurately be described as modest savings – and they depend on dubious assumptions, including full cooperation from the Trump administration.

Nixon may have been referring instead to projections by Gerald Friedman, an economics professor at the University of Massachusetts at Amherst, who claimed the New York Health Act would reduce spending by 16 percent. Friedman is an avowed supporter of single payer whose analysis relied on exaggerated assumptions and questionable math.

Less partisan analyses of single payer at the national level – including a report on U.S. Senator Bernie Sanders’ Medicare for All plan by the Urban Institute – project that overall medical spending would increase, not decrease.

“And 98% of New Yorkers would pay less for their health care than they do now.” (Nixon)

This claim, too, appears to be drawn from Friedman’s paper, not RAND’s report – and is not consistent with his own assumptions about the tax rates necessary to finance a single-payer plan.

In fact, any claim about the bottom-line impact on New Yorkers’ spending is necessarily conjecture, because the legislation itself is so vague. It calls for imposing two new taxes – on payroll income and non-payroll income – but does not specify the exact rates, leaving that crucial detail to be determined later. The size of the tax bite would in turn depend on how much money would have to be raised, estimates of which range widely.

Nixon’s estimated family coverage premium of $17,500 is, if anything, on the low side for New York. Her claim that single-payer would cost a sixth as much – although presented as a fact – is merely an estimate, and does not appear to come from the RAND report. Her figure again appears to be based on Friedman’s proposed tax rates, which in turn are based on low-ball cost projections.

The Realities of Single Payer, a business coalition, points out that a family of four making $49,000 would currently qualify for state-sponsored coverage through the Essential Plan and Child Health Plus. The family’s direct cost would be no more than $58 a month, or $696 a year.

“It would be an enormous savings for employers here. It is seen that it would create 200,000 jobs because employers would no longer be responsible for providing health care for their employees.” (Nixon)

In fact, employers would continue to bear the bulk of health-care costs for their employees, since the bill requires them to pay 80 percent of proposed payroll taxes. This would include companies that don’t currently provide benefits, for which single-payer would be a major added expense of doing business. Because the payroll tax is meant to be progressive, businesses that currently provide insurance would stand to save money on lower-wage employees, but they would face higher costs for big earners.

The job-creation claim appears to be taken from Friedman. RAND projected the creation of 139,000 net jobs over 10 years, but the authors acknowledged that they did not consider certain factors, such as the obvious risk that employers facing a major payroll tax would avoid locating in New York.

“It would drive medical costs and pharmaceutical costs down 40 percent.” (Nixon)

The basis for this claim is unclear. The RAND Corporation estimated that single payer would reduce per capita medical costs by 1 percent in the first year, growing to 3 percent after a decade.

Even Friedman – whose savings estimates are outliers compared to those of other analysts – foresaw overall medical costs declining by 20 percent, or half as much as Nixon suggested. Nixon may have been referring to Friedman’s assertion that a single-payer system could use its negotiating leverage with drug makers to reduce pharmaceutical costs by 37 percent.

“We have a million uninsured New Yorkers in this state. But we have millions more who are underinsured, who are one diagnosis, who are one accident away from bankruptcy.” (Nixon)

One million is a reasonable rough estimate of New York’s uninsured population. The basis for saying that “millions more” are underinsured is less clear. The state’s Medicaid program for the low-income and disabled, which covers 6 million New Yorkers, offers comprehensive coverage with no deductibles. Among the 10 million New Yorkers with employer-sponsored coverage,  25 percent have no deductible. For those who have one, it averages $1,687, compared to a national norm of $1,808.

Two populations face higher cost-sharing: the approximately 300,000 enrollees in the non-group market, especially if they do not qualify for Affordable Care Act subsidies, and those reliant on basic Medicare (that is, without supplemental insurance), which includes 20 percent copayments for doctors’ bills.

“At $200 million for the transition, that is more than the current state budget.” (Cuomo)

Firstly, it appears that Cuomo was saying “million” when he meant “billion” – a common slip of the tongue.

Where he would have gotten the $200 billion figure is uncertain. RAND estimated the additional cost to the state would grow from $139 billion in the first year to $210 billion in the 10th year. Those are ongoing expenses, not transitional costs.

An analysis of the New York Health Act by Avik Roy of the Foundation for Research on Equal Opportunity estimated that the plan would require a tax hike of $226 billion in the first year.

By comparison, the current state budget, including federal aid, is $170 billion.

The only state that truly “tried to do” single payer was Vermont, where a statewide plan was enacted by lawmakers in 2011. Then-Governor Peter Shumlin, the plan’s chief proponent, abandoned the project three years later on grounds that it was too costly.

California’s situation is similar to New York’s. One house of its Legislature approved a single-payer plan last year, but the other has balked at the price tag.

Here is a full transcript of Nixon’s and Cuomo’s responses to moderator Maurice DuBois of WCBS-TV, (which begin at 16:34 of this recording):

Ms. Nixon, you are proposing that New York State move to a single-payer health care system, also known as Medicare for All. Everybody would be covered. A RAND Corporation study found this would cost $139 billion. That’s almost the size of the state budget. It would double it. How do you plan to make this happen?

So the RAND Corporation also said that it would be a tremendous savings for New York State. We can insure all of our people here by a single-payer, Medicare for All system. We can do it better. We can do it cheaper. We can do it with no copays, with no deductibles. And 98 percent of New Yorkers would pay less for their health care than they do now.

If you look at say what a family now who earns, let’s say $49,000. The cost of health care for that family is $17,500, the cost between the individual and the employer would be a sixth of that. What we would have is a payroll tax in order to pay for it. It would be taken out of people’s payrolls the same way Social Security is taken out.

It would be an overall savings for 98% of New Yorkers.  And it would be an enormous savings for employers here. It is seen that it would create 200,000 jobs because employers would no longer be responsible for providing health care for their employees. It would drive medical costs and pharmaceutical costs down 40%.

We have a million uninsured New Yorkers in this state. But we have millions more who are underinsured, who are one diagnosis, who are one accident away from bankruptcy. This is the kind of change that New Yorkers really care about. This is the kind of change our Democratic Party should be embracing in order to address the incredible inequality here. Health care is a human right. We can insure all of our people and we can do it at enormous savings not only to individuals and to employers but to the state itself.

In theory it [single payer] is right. It reminds me of the story of the doctor who says, “If the patient survives the operation, he’s going to have a long and health life.”

Long term, single payer works – there’s no doubt about that. It works easier on a national level to make the transformation. The question Ms. Nixon couldn’t answer is the projected cost. At $200 million for the transition, that is more than the current state budget. The current state budget is $170 million for everything: health care, education, etc. Where do you get the $200 million short term, which would double the tax burden and take money from everything else, to get to single payer?

It is the right idea. It should be explored. It is hard to do.

The real thing we need to do is have a president of the United States who understands that health care is not a luxury, it is a human right. And it has to be done on the federal level, and let’s elect a Democratic Congress, and let’s force this president to do it.