The details apparently would get rancid if exposed to daylight, but Governor Cuomo and legislative leaders have announced the broad outlines of their budget deal for fiscal 2022, which began April 1. The final budget bills, including the all-important revenue bill and “big ugly” details, are due to appear and be voted upon in the dead of night.

In addition to a soak-the-rich tax hike, which threatens to aggravate leakage of heavily taxed millionaire earners from New York’s tax base, the agreed-upon budget as summarized by Cuomo features eye-popping spending numbers. 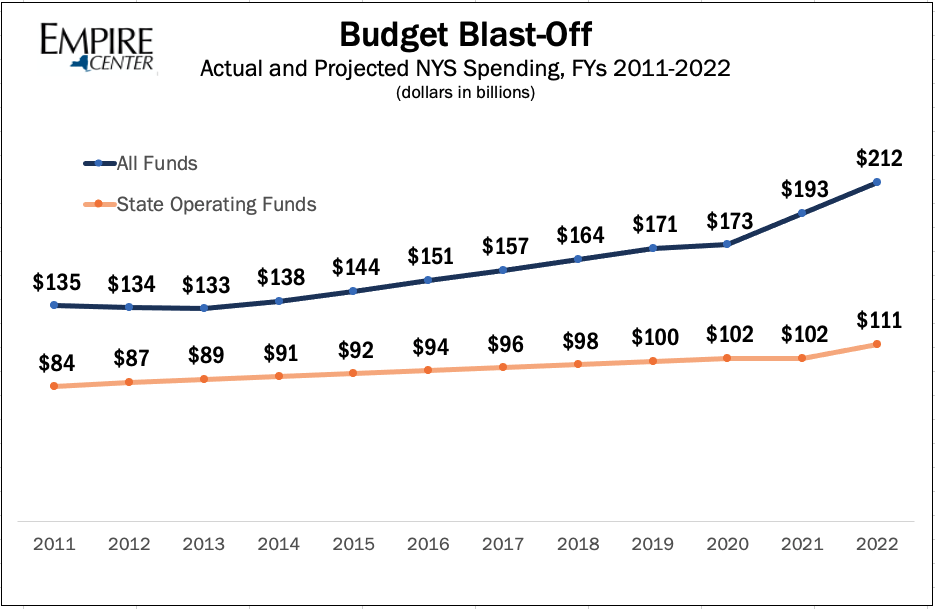 As shown above, All Funds spending—the broadest budgetary measure, including recurring federal reimbursements for Medicaid—is poised to grow to $212 billion—second only to California’s $227 billion proposed budget, and $20 billion more than Cuomo proposed in his Executive Budget.

The largest State Operating Funds spending increase singled out in the initial news release from the governor is school aid—up $3 billion, or a whopping 11.7 percent.

The All Funds total alone will represent an increase of 10 percent over the 2021 total, and 22 percent over FY 2020. The two-year percentage increase is by far the largest in at least 35 years.

After average growth of 2 percent a year in Cuomo’s first 10 budgets, the State Operating Funds spending hike of 8.6 percent will be the largest since a 10 percent increase in 2007, which included billions in spending hikes passed over Governor Pataki’s vetoes.

Since 1984—Governor Mario Cuomo’s second year in office, base year for current budgetary accounting measures—there have only been three years when State Operating Funds spending has equalled or exceeded 8.6 percent in nominal terms.  Adjusting for inflation, the increase will be the largest on record.