With less than a week before the start of the new fiscal year, both Governor Cuomo and the Legislature are seeking to raise taxes on New York’s highest earners—giving the Empire State’s already high-taxed income millionaires a bigger financial incentive to avoid New York or relocate to lower-taxed states.

The governor’s tax hike would be smaller and expire after three years, while the Legislature’s preferred tax hikes would be two-and-a-half times as large, and permanent. Virtually unmentioned by tax-hike proponents (excepting, occasionally, the governor) is the impact of the new federal tax law and its virtual elimination of state and local tax (SALT) deductions. Under the new federal law, the effective marginal rate in New York has been pushed up to historic highs since 2018.

While tax hike advocates deny it, erosion of the tax base isn’t just a theoretical possibility. Compared to national trends, New York already has seen a drop-off in its millionaire-earner population since the depths of the Great Recession in 2009, which was also the first year of a supposedly temporary “millionaire tax” surcharge that has been extended repeatedly ever since. 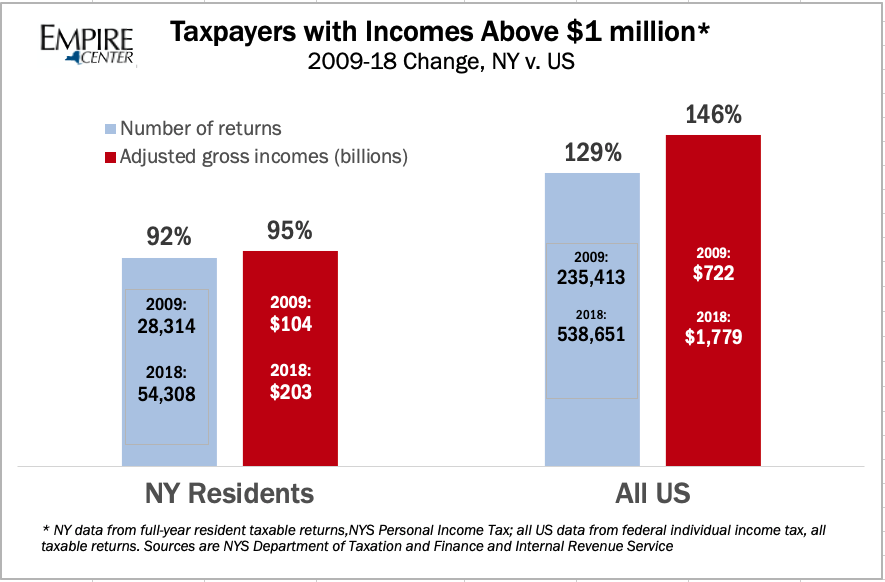 If New York’s millionaire earner tax base had grown in line with the national average between 2009 and 2018, gross incomes in this category would have been $53 billion higher. Applying the average tax rate for New York income millionaires in 2018, that would have yielded an additional $4.1 billion in tax revenue.

In other words, New York could have collected $4.1 billion more in taxes by attracting and retaining income millionaires at the same rate as the U.S as a whole from 2009 to 2018.

The income tax hikes backed by legislative Democrats would raise roughly the same amount—the Senate estimating its bill would boost revenues by $4.15 billion, the Assembly estimating its slightly different higher tax brackets would yield another $4.3 billion. (Cuomo is proposing a smaller rate hike to raise $1.5 billion.)

During the period in question, there was a similar disparity between the increase in resident taxpayers and in nonresidents who must file New York tax returns because they earn at least some income from work or a closely held business in the state.

Between 2009 and 2018, the number of taxable returns filed by nonresident income millionaires increased 130 percent, from 24,201 to 55,550. Their federal adjusted gross incomes rose 186 percent, from $104 billion to $297 billion. If resident payer incomes had kept pace with the incomes of nonresidents in the $1 million-and-up brackets, the tax base would have been about $95 billion higher, yielding an additional $7.3 billion in income. 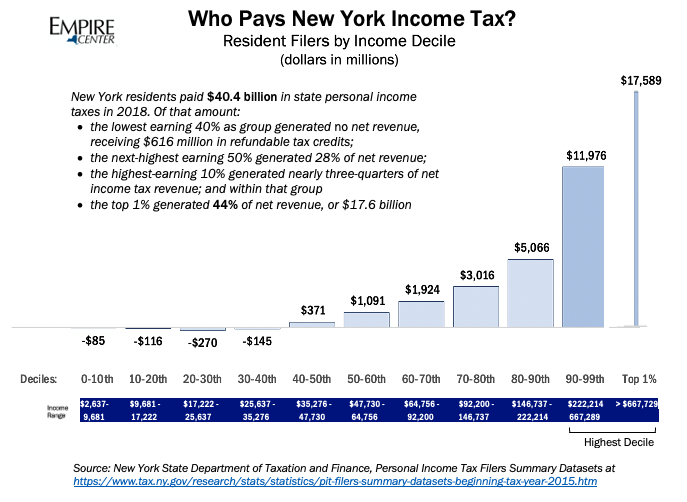 As shown above, the highest-earning 1 percent of state residents—for which the cutoff most recently was an income of about $670,000—generate 44 percent of all state income taxes paid by New Yorkers. Thus even a small decrease in the number of high earners who would otherwise be based in New York can have a disproportionately large impact.

For example, the roughly 4,244 New York resident households earning more than $5 million as of 2018 paid $9.2 billion in state income taxes, fully 20 percent of the total collected from all state residents that year. A net drain of just 100 such households would barely be noticed in the higher end of the Manhattan real estate market, but would cost the state more than $200 million—real money even in Albany terms.

** The New York comparative data for 2009 and 2018 come from state personal income tax returns, as compiled by the state Department of Taxation and Finance, and the national data are as reported by the Internal Revenue Service from federal income tax returns. Comparisons using the different datasets are necessary because the IRS did not break out data at the $1 million bracket before 2010. However, the two datasets are closely aligned, with small differences due to the timing of interstate moves in and out of New York.