It’s no surprise that tax-funded employer contribution rates to the New York State and Local Retirement System (NYSLRS) are about to drop again, as announced today by state Comptroller Thomas DiNapoli. The rate calculation for 2015-16 is based on a “smoothed” value of assets over a rolling five-year period that has now moved beyond the worst year in the system’s history—a 26 percent loss in fiscal 2009.

If experience is any guide, we can expect New York politicians and labor leaders, encouraged by necessarily simplistic media summaries of a complex subject, to treat the decline in contributions as just the latest signal that happy days are here again (for good) for public pensions. It isn’t true, however. To be sure, thanks to a hyper-protective state Court of Appeals, the New York fund is in better shape than most other sizable public pension funds. But like its counterparts, the state pension system remains a ticking bomb that can and will go off again, sooner or later, at the worst possible time for taxpayers.

By historical standards, even with the latest announced decreases, contribution rates remain near historical highs, as shown in the comptroller-supplied chart below. In fact, applying private sector accounting standards, these contribution rates are still too low. Public pension funds like NYSLRS can get away with charging less than they should because they are backed up by what amounts to a constitutional guarantee of a taxpayer bailout whenever they fall into a hole. 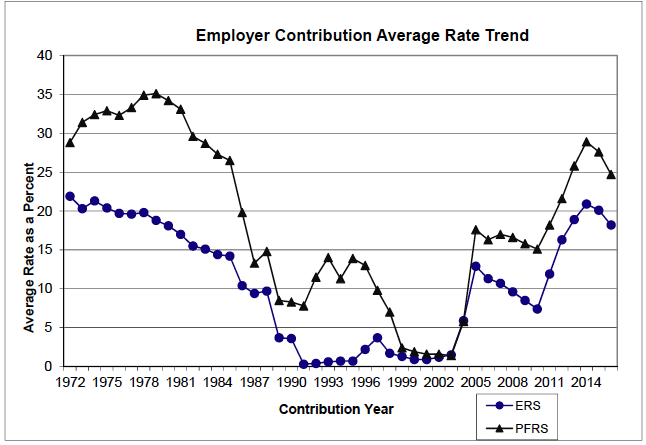 Keep in mind that, while NYSLRS (like all of its counterparts) has enjoyed double-digit returns in recent years, its average annual return since 2000 is still just 5.8 percent. Since DiNapoli became comptroller at the end of fiscal 2007, including the recent boom years, the return averages just 5.4 percent.  The markets for the past 14 years have been exceptionally volatile – with returns most recently boosted by historically microscopic interest rates, which has artificially boosted equity values while depressing the yield of all fixed-income assets such as bonds.

Most economists, financial analysts and actuaries in the private sector agree that public pension funds should “discount” their future liabilities at a lower rate, something between a virtual zero-risk Treasury bill rate (now around 3 percent) and the AAA-rated corporate bond (more like 4 percent).  Adopting this requirement, which already applies to all private-sector defined-benefit pension funds, would better represent the true financial risks for taxpayers — and, by the way, show that NYSLRS is not even close to “fully funded” status, even if it is better funded than most states.

New York City’s pension system has lowered its assumed rate of return to 7 percent, a level former Mayor Michael Bloomberg said was still comparable to a promise from Bernie Madoff.  But the city’s actuary also presents alternative measures of funding status – i.e., including an estimate of liabilities based on risk-free discount rates. DiNapoli and other fund managers and trustees should do the same thing before the Government Accounting Standards Board gets around to forcing them to do so.

Doubling down on Wall Street

As of 2013, the latest year for which these figures are available, NYSLRS  had 73.4 percent of its assets invested in a volatile mix of stocks and “alternatives” including real estate, private equity funds and hedge funds. By comparison, in fiscal 2007, just before the financial meltdown (and just after DiNapoli’s appointment), the pension fund had 72.2 percent of assets in stocks and alternatives. At that point, compared to 2013, a larger share of assets was in traditional stocks and a smaller share (14 percent), compared to 2013’s 18 percent)  was in alternatives.

In other words, the pension fund is taking more risks than ever to chase the high returns it needs to hit its assumed target. When the cycle inevitably turns down again, taxpayers will again be holding the bag.