High taxes are the top reason New Yorkers are considering or making plans to move out of the state, according to a new Zogby poll issued last week.

Alarmingly, 39 percent of 1,000 survey respondents said they’re looking to leave the Empire State. The number one factor pushing them to do so is high taxes, which a plurality of more than one-third (36.7 percent) say is their top reason.

The results defy the notion, voiced by former Governor Cuomo among others, residents are leaving New York primarily due to the weather.

Only 7.7 percent of those interested in leaving blamed the weather.

Respondents who said they’re looking to leave the state were asked, “Which is the top reason you are considering or have made plans to leave New York state and reside somewhere else?”

The answers are shown below: 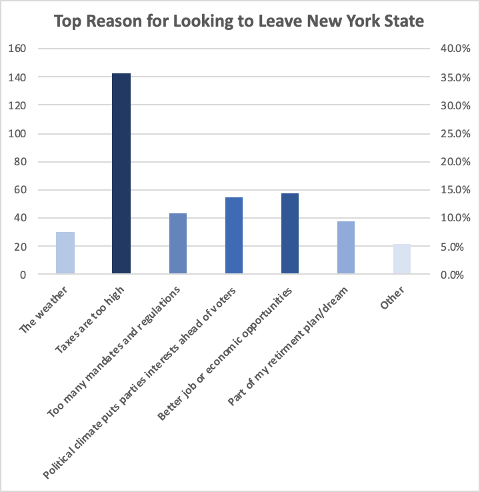 High taxes topped the list across key subgroups: Democrats, Republicans, liberals, moderates, conservatives, all income groups, all age cohorts beyond age 24, and all education levels except those without a high school diploma, according to response breakouts.

In other words, it’s not only high-income New Yorkers or those philosophically opposed to high levels of taxation that are looking to leave due to the tax burden.

None of this is surprising. By any measure, the tax burden New Yorkers bear is among the nation’s heaviest. And New York lost more than 1.5 million residents to net outmigration during the past decade, including more than 350,000 just during the 12 pandemic-plagued months leading up to July 1, 2021. This was part of a broader pattern, in which U.S. citizens flocked from high-tax states to low- and no-tax states during that time.

But those are correlations. The Zogby poll asks residents to weigh tax incentives against other potential factors. The responses yield a new data point indicating high taxes are the prime mover in the ongoing flight from New York.

What’s being done to stave off a tax-induced exodus? Precious little.

With respect to property taxes, education groups are looking to take the state in the opposite direction by lobbying the Legislature to lift the statutory tax cap that’s saved New York homeowners billions in property taxes over the past decade.

Based on the Zogby poll, that’s a sure way to hasten the exodus from the Empire State.

Sponsored by Unite New York, the poll has a margin of error of +/- 3.2 percentage points.