In her first State of the State message today, Governor Kathy Hochul pledged to accelerate scheduled personal income tax cuts for “middle class” New Yorkers, with a fiscal impact she pegged at $1.2 billion.

That figure sounds large but doesn’t amount to all that much in a multi-year state fiscal context; even combined with a $1 billion “property tax rebate” also promised by the governor, the PIT reduction stacks up an election-year voter gratuity rather than a significant, growth-boosting reduction in the tax burden.

The tax cuts in question were marginal rate reductions first enacted in 2016 as part of a budget deal between former Governor Andrew Cuomo and (mainly) the then-Republican working majority in the state Senate. They were scheduled for implementation across eight years, starting in 2018 and becoming fully effective in 2025.

Hochul proposes accelerating the tax year 2025 rates into 2023. For perspective, here’s a table summarizing the original rate cut schedule as of 2016 (by 2018, the taxable income thresholds had settled at levels $150 to $200 higher than shown here).  While the rate changes shown are for married-joint filers, equivalent cuts also were scheduled for single and head of household taxpayers. 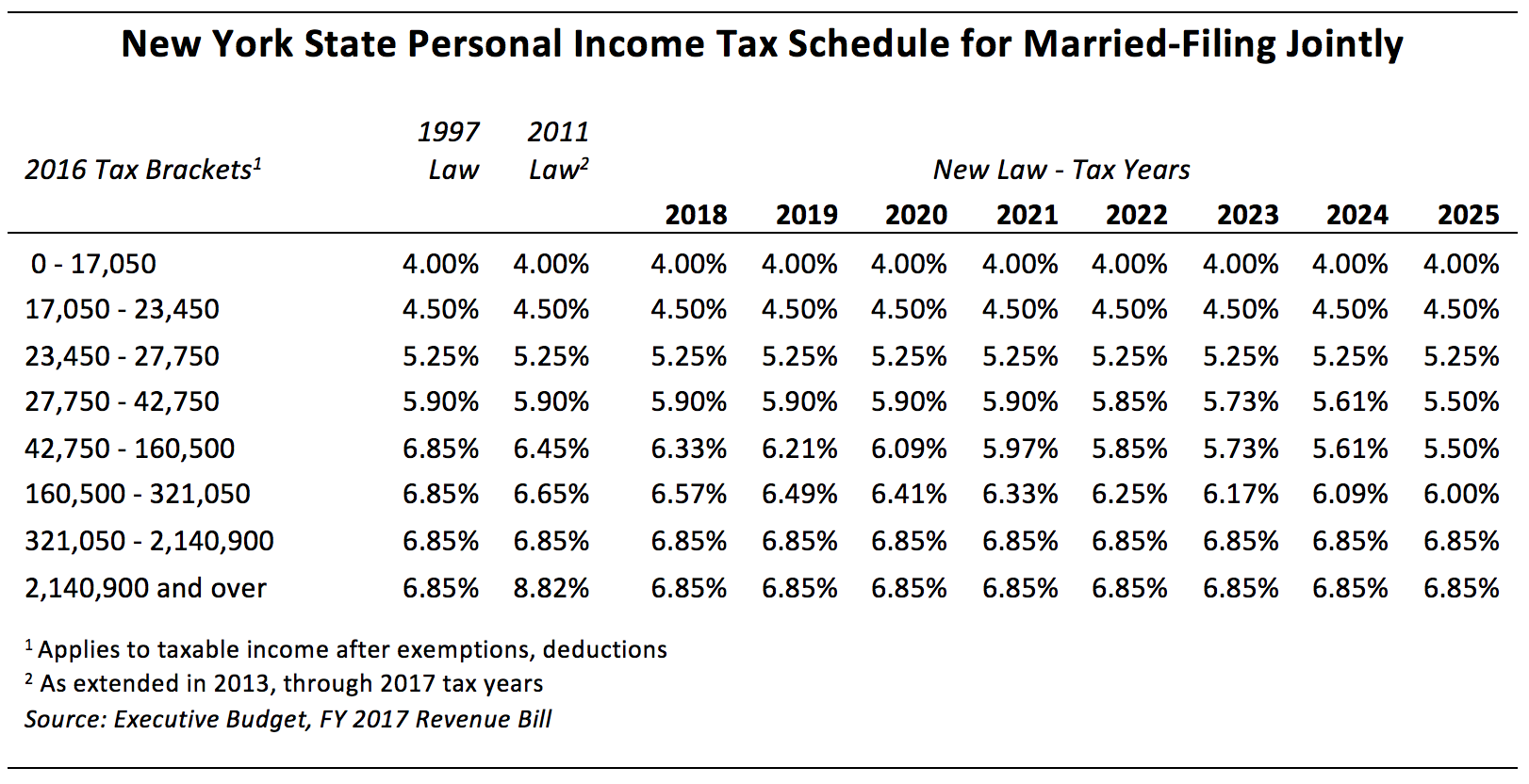 The following table, also dating back to 2016, is a projection of fully implemented income tax savings for families at the median-income level in different regions of the state.

As those figures would indicate, and as reflected in the percentages in the right-hand column of the table, the tax cut packed a bigger punch for the “middle class” as defined by elevated downstate standards.  One of the shortcomings in the 2016 tax plan may soon become more glaringly obvious: that tax cut ended the state’s automatic inflation “indexing” of the income tax code, which adjusted brackets to reflect the rising cost of living. If inflation persists at high levels, it will lead to at least slight tax hikes due to bracket creep, which over time will slowly erode savings from the rate cuts Hochul touted today.

Speaking of tax touts, the governor today also announced she’d propose $1 billion in property tax rebates, offering no further details.  Not to be confused (presumably) with the $383 million in property tax credits approved as part of the fiscal 2021 state budget, Hochul’s proposal sounds like the latest resurrection of the check-in-mailbox kickback scheme first concocted by Senate Republicans as the STAR Rebate in 2006, which was allowed to expire during the state fiscal crisis of 2009. A new version of that rebate was resuscitated by Cuomo and the Senate as an end-of-session deal in 2015; it sunset on schedule in mid-2020. (For more background, see my June 2025 blog post, “Another phony tax cut.”)