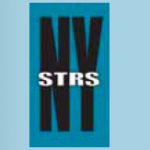 But taxpayer contributions to NYSTRS, already due to drop by more than four full percentage points of covered payroll in school year 2015-16, nonetheless are projected by the system actuary to decrease by a little bit more (up to 1.76 percentage points) in 2016-17.

And all this will happen, the system actuary said in a presentation to the system’s board this morning, despite the fact that NYSTRS is finally reducing its rate of return assumption for the first time in 28 years. Having realized investment gains of just 5.9 percent since 2000, NYSTRS has finally gotten around to lowering its future expectations—all the way down to 7.5 percent.

At the 7.5 percent level, the teacher fund will still be expecting bigger returns than New York City’s pension funds or the New York State and Local Retirement System (NYSLRS), both of which have ratcheted down from 8 to 7 percent —or, as then-Mayor Michael Bloomberg put it a few years ago, from a level that was “absolutely hysterical, laughable” to one that is merely “indefensible.”*

So, how is it possible for tax-funded teacher pension contribution levels to continue dropping even after (a) a bad year for investments, and (b) the belated adoption of a slightly more modest return assumption?

Chalk it up to the magic of public pension accounting.

The assumed rate of return is crucial here, because public funds like NYSTRS are allowed to discount their future liabilities using this rate. The higher the discount rate—the more the fund assumes it will earn every year—the less money employers are required to put into the fund every year.

Private pensions can’t get away with this practice. While they, too, aspire to beat the financial markets with high returns on their investments, and sometimes even do, they are subject to accounting rules that require them to discount their liabilities at a much lower rate tied to the yields on top-quality corporate bonds or Treasury bills. The purpose is to ensure that the funds are in a better position to pay their beneficiaries. Similar rules apply to life insurers.

By contrast, when their rate of return assumptions turn out to be too optimistic, public funds such as NYSTRS simply stick taxpayers with a higher bill in the form of increased employer contributions, which are calculated as a share of covered payroll.  This is just what has happened to New York school districts over the past 15 years. The following chart shows the roller-coaster trend in tax-funded employer contributions to teacher pensions over the past 35 years, and looking forward through 2017.  Note: even at the recent high point, pension costs were lower than in the early 1980s, before NYSTRS joined other public funds in making much bigger and riskier bets on stocks. 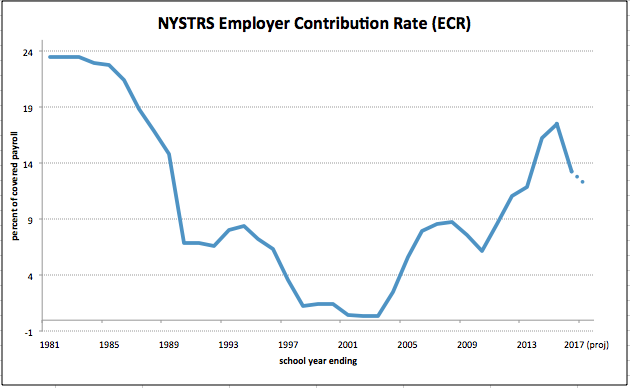 NYSTRS previously announced that its contribution rate, which reached a 28-year high of 17.5 percent for the payment due in September 2015, will drop by 4.2 percentage points, to just 13.3 percent in 2015-16.  That’s tantamount to a 4.2 percent reduction in the total cost of paying teachers and administrators, who are by far the largest component of school budgets. It explains how school districts will actually be able to live more easily than you might think with a property tax cap of just above zero next year.

The NYSTRS actuary said today that the employer contribution rate is likely to drop again in 2016-17, to a range of between 11.5 percent and 12 percent. That, of course, will further relieve pressure on school budgets.

Young said the change in the assumed rate of return alone would normally have driven up the contribution rate by 6.1 percentage points. And an accompanying change in the system’s “mortality table,” reflecting the fact that retirees will be living longer in the future, would push up the contribution rate by another 2.8 percent.  But these costs were partially offset by changes in some other actuarial assumptions—mainly a drop in assumed pay increases, based on the less generous contract settlements teachers have been getting in the wake of the recession over the last five years.

Taken together, all the new updated NYSTRS actuarial assumptions have the net impact of adding 2.89 percentage points to the contribution rate that the system otherwise would have charged in the fall of 2017. To look at it another way: if none of the actuarial assumptions had changed, the contribution rate might have dropped to less than 9 percent in the school year after next.

Not so fast. In reality, using real-world financial accounting and actuarial standards, teacher pension costs are not nearly high enough.

The fund’s investment advisors calculate that its current mix of assets, adjusted for risk, will earn 6.6 percent a year, nearly identical to the return predicted by NYSLRS actuaries. That, in fact, is the maximum rate the fund ought to be assuming as the basis for contributions, even if you accept the dubious premise that public funds can be less conservative than private ones because they have taxpayers as a backstop.  But a 6.6 percent assumed rate of return would drive NYSTRS contribution rates back above 20 percent of salaries, a level last seen more than 30 years ago.

The NYSTRS move to 7.5 percent from 8 percent is a belated step in the right direction—but a very small one. Given the harrowing lessons of the financial crisis, during which pension funds lost 20 to 30 percent, it’s also at least five years too late.  Like Comptroller Thomas DiNapoli, who recently adjusted his own actuarial assumptions in a manner calculated to reduce pension costs in the short term, the NYSTRS board is blowing a golden opportunity to go further in the right direction.

Making just a minimal downward adjustment to the return assumption ensures that NYSTRS can continue reducing the bills it sends employers in the short term, which will be applauded by school superintendents and school boards. But if the TRS earns less than 7.5 percent in the next few years—which is quite possible if not even likely—school districts’ tax-funded employer contributions will be rising steadily again after 2017.

Compared to what it was projecting to earn on the investments a decade ago, despite strong double-digit returns in four of the five years since the stock market crash, the fund is still in the hole, as shown in this chart: 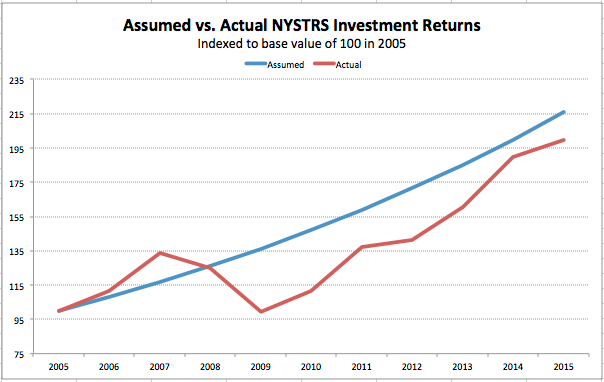 In the first quarter of NYSTRS fiscal 2016 (July-September), the fund’s investments lost money, according to its staff.  In the past month, the stock market has rebounded enough to pull the fund back up to a break-even point—but Wall Street bulls will need to start running again if NYSTRS is to hit its 7.5 percent target by the end of next June.

In the face of these larger market forces, school districts are not quite as helpless as they’d make themselves out to be. They can minimize future unpleasant surprises by continuing to keep a tight lid on salary growth, holding annual raises (including automatic “step” increments) below the actuary’s assumed 3.29 percent. That resolve will be tested in current rounds of contract talks, when many union locals surely will press to “recover” some of the money districts are saving on their NYSTRS contributions.

* Concerning the city pension funds’  adoption in 2012 of a 7 percent assumed rate of return, Bloomberg added: “If I can give you one piece of financial advice: If somebody offers you a guaranteed 7 percent on your money for the rest of your life, you take it and just make sure the guy’s name is not Madoff.”  But what did Mike Bloomberg ever know about financial markets, right?