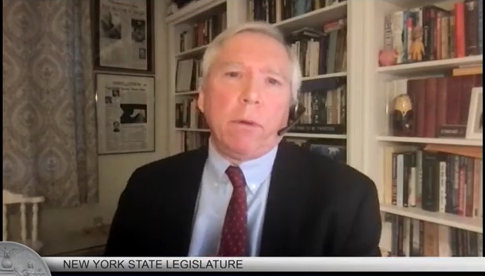 In economic terms, the coronavirus pandemic has been the most disruptive event to hit New York and the nation since the Great Depression in the early 1930s. While New Yorkers hope to resume to some semblance of normal life by summer, the fiscal hangover for the state and its local governments will linger for years.

Despite having been the epicenter of a devastating COVID-19 outbreak, New York’s tax base has held up better than those of other major states. This is largely due to our heavy reliance on a progressive income tax. Even during the pandemic, we have continued collecting state income taxes from numerous well-paid remote workers, including nonresidents who haven’t set foot in New York since last March. Our income tax receipts have held up more strongly than expected in part because New York does, in fact, “tax the rich”—as reflected in estimated income tax payments, which come mainly from high-earning business owners, professional partners and investors. Those payments in January were up $1 billion from the previous year.

The economies of New York City and State will recover eventually—but how strongly, and how soon, are open questions. In the meantime, the Legislature’s guiding principal can be summed up in five words: don’t push more taxpayers away. Avoid giving any taxpayer—especially the high earners who already generate a disproportionate share of total revenues—an added incentive to leave or to disinvest in New York. In keeping with that priority, I would offer three recommendations:

One further revenue proposal for your consideration: Repeal the state and local sales tax exemption on clothing purchases under $110, which has a “tax expenditure” revenue impact of $800 million a year. To provide larger savings for families with children—the original intended beneficiaries of this overly broad, poorly targeted exemption—you could redirect $400 million of the savings to expansion of the existing Empire State Child Credit. This would adjust for the recent increase in the credit at the federal level.

Suspending scheduled income tax cuts for four years, repealing the Film Production Credit, and repealing the sales tax exemption on small clothing and footwear purchases would, net of the suggested child credit increase, raise $1.2 billion in 2023, rising to $2 billion by 2025—without hitting any New Yorker with a significant tax increase.

We are hearing that President Biden’s coronavirus relief bill would hand $50 billion to the state and to local governments in New York, including $12.7 billion in unrestricted aid and nearly $10 billion to K-12 education. Those numbers will change, but it seems likely a very large—but temporary—additional injection of federal COVID relief funding is coming to New York. The revenue actions I’ve proposed, combine with spending restraint and other reforms, can be saved to help finance a transition to a sustainable budget in the longer term when the aid is exhausted.

Unfortunately, despite the very shaky future of our tax base, the current legislative session has already seen the introduction or reintroduction of some of the most radical tax increase proposals New York State has ever seen. These measures are not designed to balance the budget without cuts, but to pay for vastly expanded state spending—on a scale never previously proposed or considered in New York.

Advocates of these tax hikes claim that New York’s income tax is regressive, taxing the poor as heavily or almost as heavily as the rich. They also claim there is no evidence that tax increases will drive income millionaires and multimillionaires out of the state. But they are wrong on both counts. In fact:

In addition to misrepresenting the tax code’s progressivity and discounting the unsettling impact of the pandemic, advocates of higher taxes on New York “millionaires and billionaires” consistently ignore the impact of the $10,000 cap on state and local tax (SALT) deductions enacted as part of the 2017 federal Tax Cuts and Jobs Act. With the SALT break virtually gone for the first time in history, the marginal rate in New York stands at its highest level ever—a noticeable increase in what might be called the “tax price” of New York, as compared to lower-taxed states.

Even before the SALT cap took effect, there were signs of erosion at the high end of New York’s tax base. From 2009—the recessionary low point following the financial crash, to 2018, the latest year for which data are available, the number of taxable returns filed by New York residents with incomes above $1 million increased by 92 percent. During the same period, the number of nonresident income millionaires in the New York tax base increased by 137 percent, according to state data. The total number of federal income taxpayers in the $1 million-and-above bracket increased by 128 percent.

Also from 2009 to 2018, the adjusted gross incomes (AGI) of New York resident income millionaires nearly doubled, from about $104 billion to $203 billion. During the same period, the AGI of nonresident New York filers in the same brackets more than tripled—increasing from $104 billion to $381 billion. The biggest increase among nonresident New York taxpayers was among those with incomes above $10 million, whose AGIs quintupled from $50 billion to $228 billion. According to IRS data, the AGI of all U.S. income millionaires increased by 145 percent, from $722 million to $1.8 trillion, from 2009 to 2018.

What I’m describing is correlation, not causation, obviously—but the data certainly do not support claims by tax hike advocates that higher tax rates haven’t mattered in New York, or that the state could raise its “millionaire tax” with impunity even before the pandemic disruption drove many New York income millionaires into temporary exile.

Raising taxes on the highest incomes to raise revenues in the short term will only accelerate the erosion of our tax base in the long run, ultimately undermining funding for the very programs the Legislature wants to protect. Even worse, as New York’s economy struggles to recover from the pandemic, enacting any one of the significant “millionaire and billionaire” tax increases now being promoted as a package could turn that erosion into a full-scale landslide. 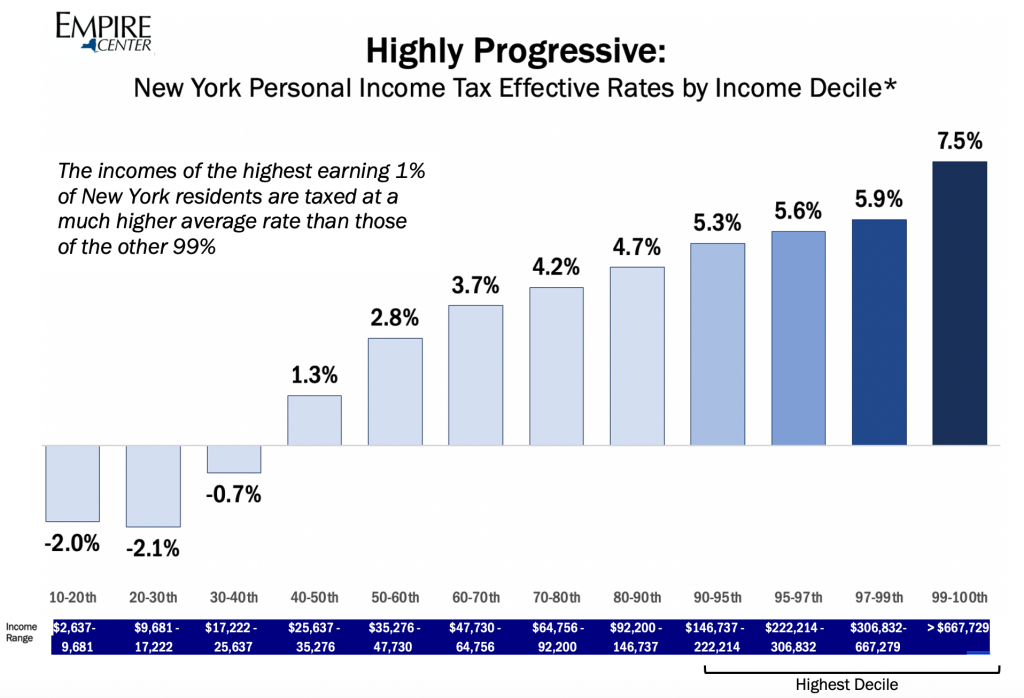 * Tax liability, after credits, as a percent of New York Adjusted Gross Income distribution for all full-year resident returns as of 2018. In lowest decile, not shown, total NYAGI and tax liability were both negative. New York City resident income tax not included 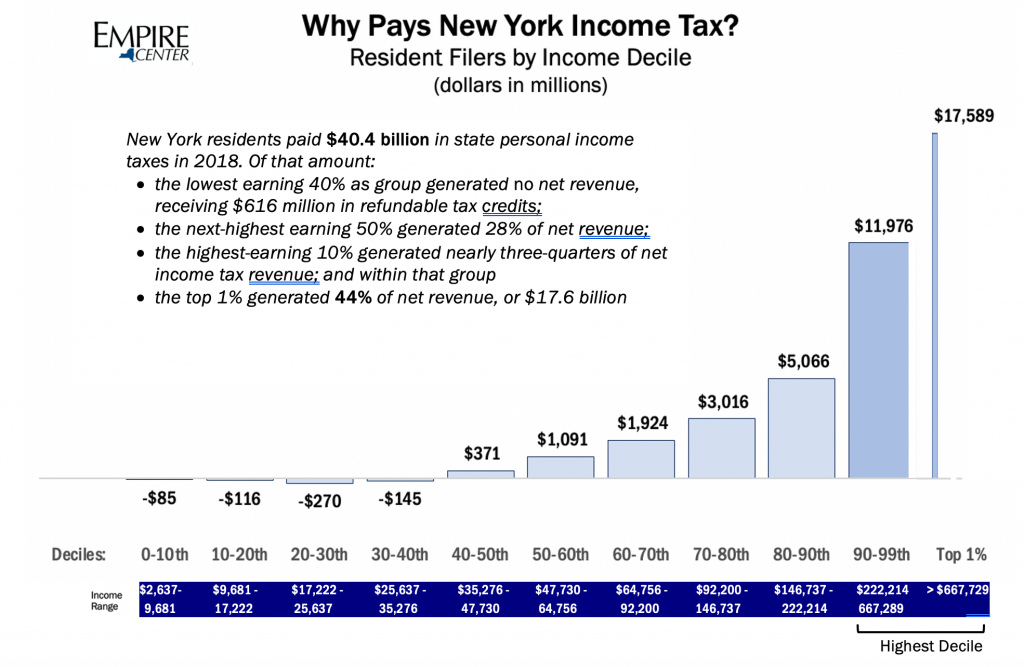 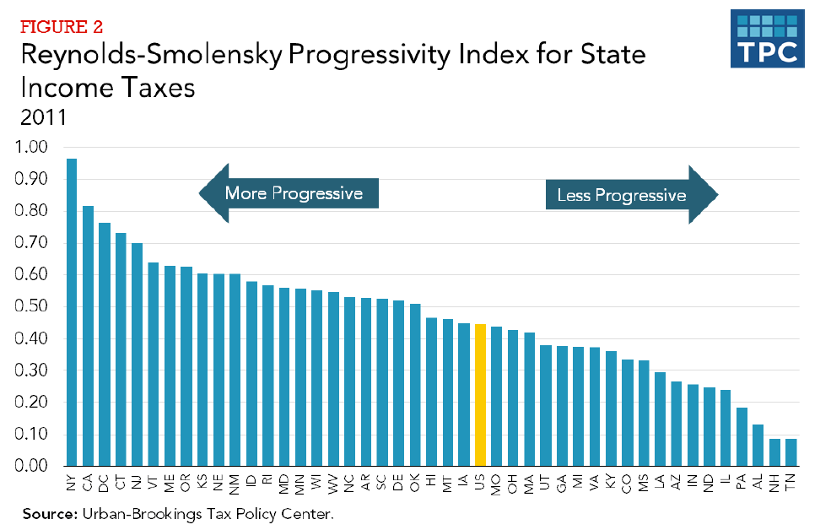 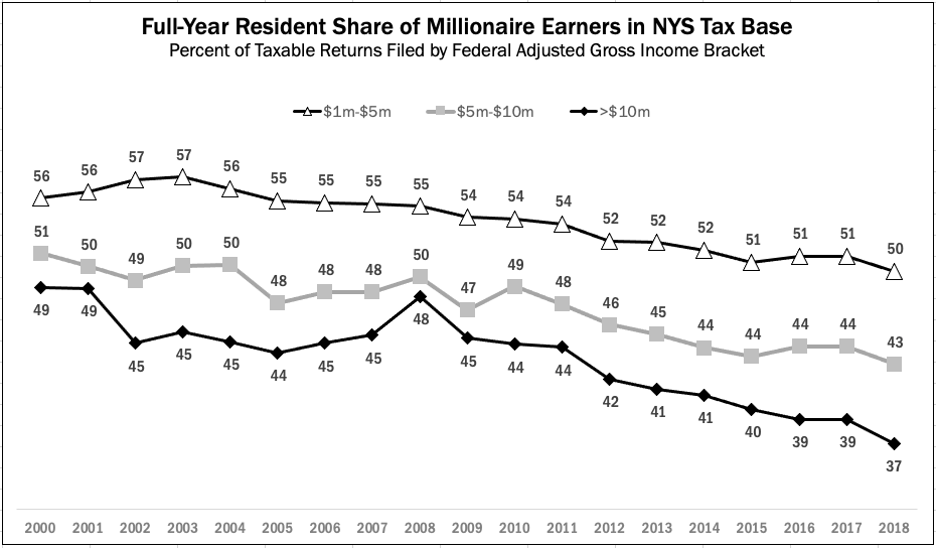