Eighteen school districts sought to override the state’s property tax cap in yesterday’s school budget votes—the fewest attempts since the tax cap was enacted. Seven of those districts failed to win the 60 percent supermajority required to override the cap.

As we reported yesterday, when compared to both short- and long-term trends, the state’s property tax cap is making a difference. Data indicate that compared to the 30-year average, property owners have saved a total of $7.6 billion and tax levies since 2011 have risen by an average 2.2 percent—the lowest in any four-year period since 1982.

Nearly half of the state’s school districts (excluding the big 5, which don’t hold budget votes) proposed levies that came within $1,000 of the cap, as we highlighted earlier this month in our School Budget Spotlight. Proposed budgets would increase per-pupil property tax levies by 2.1 percent, a slightly lower hike than last year’s 2.6 percent among proposed budgets.

Results of those seeking overrides are shown in the table below. Unofficial vote tallies are based on news accounts. 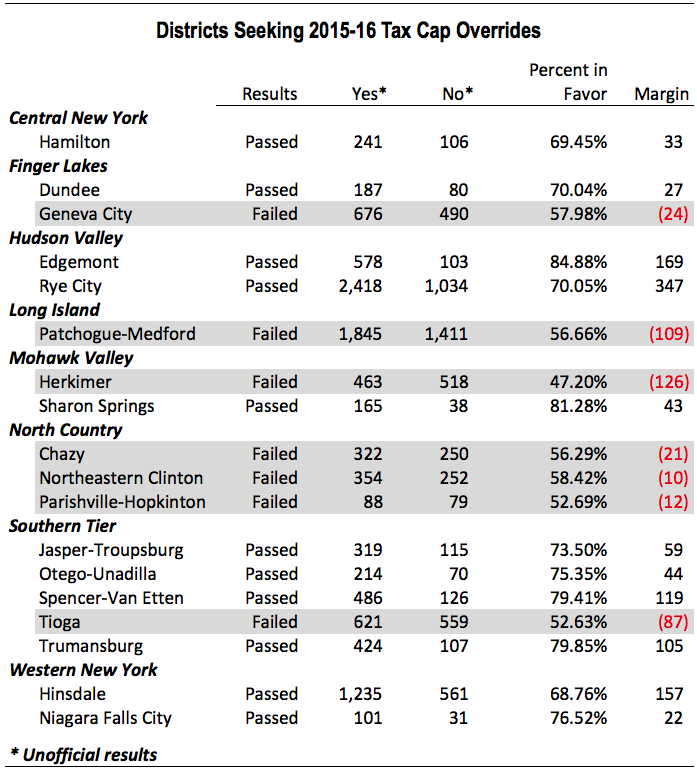