The state’s Essential Plan ran up $5 billion in surpluses over the past two years as the program automatically drew pandemic relief money that it did not need – and which officials have no immediate way of spending.

The program’s federal funding overshot expenses by $1.5 billion in the 2021 fiscal year, $3.2 billion in 2022, and another $393 million in the first quarter of 2023, according to records from the comptroller’s office (see chart).

As a result, the balance in the program’s trust fund ballooned to just over $8 billion as of June 30, up from $3 billion in March 2019. 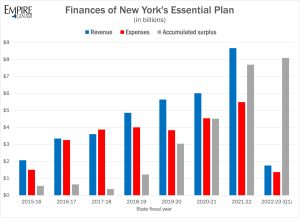 Source: Office of the State Comptroller

The Essential Plan is an optional benefit within the Affordable Care Act that was exercised by only two states, New York and Minnesota. New York’s version offers zero-premium government-funded health coverage to residents who are ineligible for Medicaid but make less than 200 percent of the federal poverty level. As of July, the plan had just over 1 million enrollees.

Funding for the program is formula-based: The state receives 95 percent of the amount that the federal government would have spent on tax credits and other subsidies if enrollees had purchased private insurance through an Obamacare exchange.

In New York, this formula has turned out to be substantially more generous than necessary – largely because the Essential Plan reimburses providers at deeply discounted Medicaid rates, allowing it to operate more cheaply than commercial health plans.

Since the program’s launch in 2016, federal funding has more than covered the total cost of Essential Plan benefits in all but one year, causing a balance to accumulate in the program’s trust fund. The yearly overages grew even larger when, as a pandemic relief measure, federal lawmakers temporarily expanded the premium tax credits available under the ACA – which triggered more formula-driven funding for the Essential Plan.

Washington recently extended those changes for three more years, meaning the unnecessary bounty will continue through 2025.

The ultimate fate of the excess money, at $8 billion and rising fast, is unclear. By law, the state can only use the money to finance medical care for eligible residents, whose costs are already more than covered.

Meanwhile, the issue has slipped through the cracks in Washington, where officials have so far made no effort to recoup the unspent billions, redirect it for another purpose or, at the very least, fix a funding formula that’s obviously broken. For now, the public’s money will continue piling up by the billions – and remain in limbo.