As the coronavirus pandemic resurges across New York, residents of nursing homes are once again bearing the brunt.

During the five-week period from Oct. 25 to Nov. 29, nursing home residents accounted for a quarter of COVID-19 deaths statewide – and more than half in parts of upstate – even though they represent less than one-half of 1 percent of the population.

In a handful of small counties, nursing home outbreaks accounted for 100 percent of coronavirus deaths during those five weeks. An example is Tioga County, with just over 48,000 residents, where all 23 deaths during the month occurred in two facilities – 14 at River View in Owego and nine at Elderwood in Waverly, according to data from the federal Centers for Medicare & Medicaid Services.

The lopsided percentages suggest that nursing home residents remain acutely vulnerable to the pandemic in spite of stepped-up precautions adopted after the spring wave – including frequent testing, heavy use of infection-control equipment and tight limits on outside visitors.

Statewide, the federal data collected weekly from nursing homes show 268 COVID-19 deaths between Oct. 25 and Nov. 29. That represents 26 percent of total deaths reported by the state Health Department for the same period.

New York’s death rates both in and out of nursing facilities remain lower than they were in April and May. In sharp contrast to the spring, however, the current outbreak is more severe upstate than it is in New York City or its nearby suburbs – with some areas seeing their highest infection and mortality rates to date. 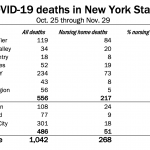 In the Southern Tier, there were 84 nursing home deaths in the five-week period, which was 71 percent of the region’s total (see table). In New York City, by contrast, there were just 18 deaths, which was 6 percent of its overall toll for the period.

In spite of tightened precautions, infection rates in nursing homes, for both residents and staff, have mostly mirrored trends in the general population (see chart). They dropped to a low point at the end of the summer and climbed since then. In November, the number of infections among residents surpassed the number among staff for the first time. 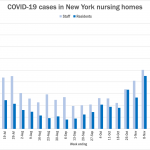 Precise comparisons to the spring wave are not possible because of flawed data collection by health officials.

The state Health Department has reported nursing home deaths only when they occur physically within the facility, which omits thousands of residents who were transferred to hospitals before dying.

The Empire Center has sued the department for release of its full data on nursing home deaths under the Freedom of Information Law. That case is awaiting a decision from Judge Kimberly O’Connor of the state Supreme Court in Albany County.

The federal data include all deaths of nursing home residents, both in the facilities and elsewhere. However, CMS didn’t begin gathering the numbers until mid-May, when the initial wave was receding, and made retrospective reporting optional.

Governor Cuomo has faced criticism over his administration’s handling of the pandemic in nursing homes, particularly for a March 25 directive from the Health Department compelling homes to accept COVID-positive patients being discharged from hospitals. More than 6,000 patients were transferred under that policy before it was effectively reversed on May 10.

In July, a Health Department report declared that the policy had caused no significant harm, arguing that the peak death rate in nursing homes came too early in April to be explained by transfers that began in late March. In conducting that analysis, however, the department relied on the partial death counts it had made public, omitting thousands of deaths that occurred in hospitals. That was one of many reasons the report was widely criticized by medical experts.

In further defense of his administration’s actions, Cuomo has cited an analysis showing that nursing homes accounted for about 21 percent of total deaths in New York, which was one of the lowest percentages of any state. However, this analysis, too, was relied on the Health Department’s partial death toll, which skews the comparison to other states that provide more complete data. Also helping to lower New York’s nursing home percentage was an overall death count that was extraordinarily high.

According to that same measure – and using the more complete CMS data – New York ranked closer to the middle of the pack from Oct. 25 to Nov. 29, a relatively quiet period of the state’s pandemic.

The share of New York’s total deaths that were reported by nursing homes, at 26 percent, was 10 points lower than the national average and put it 33rd among the 50 states.