Personal income growth in New York nearly flatlined in the first quarter of this year, reflecting the start of the economic shutdown triggered by the coronavirus crisis, according to data released today by the federal Bureau of Economic Analysis (BEA).

Revised BEA data also show New Yorkers’ incomes weren’t exactly roaring upward in the final quarter of 2019, either—a sign that the state economy was weakening even before the pandemic.

New Yorkers’ seasonally adjusted personal incomes grew by just 0.7 percent during the three months ending March 31, compared to the final quarter of 2019. This was less than one third the U.S. average of 2.3 percent and the third lowest among all states during the same period. Only Hawaii (-0.1 percent) and Michigan (-0.3 percent) had weaker personal income growth than New York in the first quarter.

The number would have looked even worse if Empire State resident incomes hadn’t been propped up by transfer receipts, mainly from Social Security and other government benefits, which increased 8.6 percent, and dividends, interest and rents, which rose 1.6 percent.

New Yorkers’ net earnings—a category including wages, salaries and business proprietors’ incomes—were down 1.6 percent for the quarter. This was consistent with a national pattern in which “earnings increased at the slowest pace since the first quarter of 2013 due to the partial economic shutdown following the outbreak of the COVID-19 pandemic in the first quarter of 2020,” the BEA said.

The nationwide map from BEA, in which pale shading equates to weak growth: 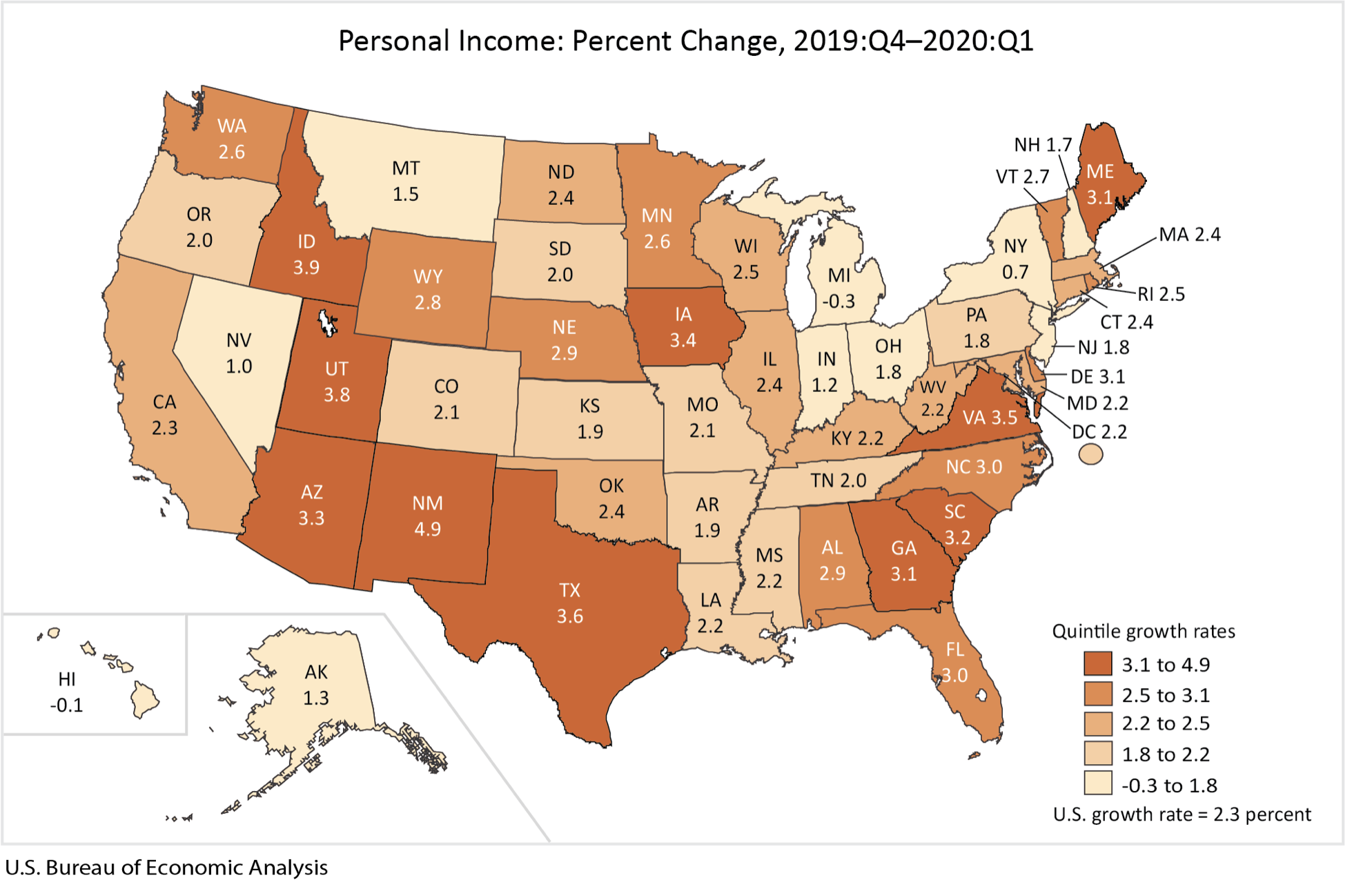 New York’s relative weakness in the first quarter of this year was not surprising given the extreme measures taken by Governor Cuomo to prevent the spread of COVID-19, starting with a shutdown of all normal business and social activity the third week in March. New York’s private job losses since the shutdown also have been especially severe by national standards.

The newly revised BEA data also indicate the state’s economic growth rate was slowing in the run-up to the pandemic. Today’s numbers show New York’s personal income during the fourth quarter of 2019 was just 1.3 percent—among the lowest increases in any state during a period when U.S. average income growth was 3.6 percent.