The Trump administration’s move this week to suspend the Affordable Care Act’s “risk adjustment” program leaves more than $300 million in payments to and from New York’s health plans in limbo and further destabilizes the state’s ACA market.

The company with the most to lose is UnitedHealth Group, whose New York affiliates were due to collect as much as $212 million in risk adjustment payments for 2017.

The biggest potential winners are CareConnect, a now-defunct plan affiliated with Long Island’s Northwell Health, which is due to pay as much as $121 million, and Fidelis Care, with a potential looming debt of $82 million.

The gains and losses for all affected New York plans are detailed in the chart below. 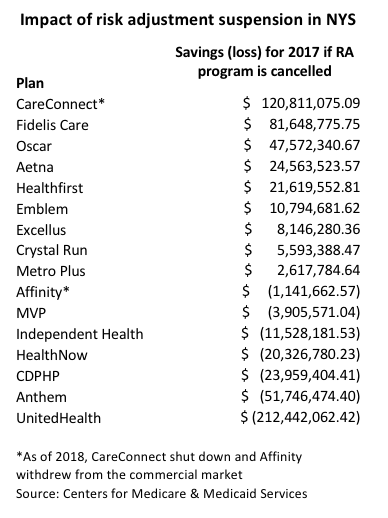 It’s too soon to say exactly how the suspension will affect ACA consumers, which depends on the complicated interplay of future court rulings, actions by federal officials and possible intervention by the Cuomo administration. But the uncertainty itself is a further blow to ACA insurance markets that have been experiencing rising premiums and declining enrollment.

The ACA’s risk adjustment program is meant to discourage plans serving the small-group and non-group insurance markets from trying to “cherry-pick” healthy customers as a way of minimizing claims and boosting profits. Under the program, the state diverts a portion of premium revenues from plans with lower-risk customers and redistributes that money to plans with higher-risk customers.

A similar program is a longstanding feature of Medicare Advantage. Its implementation under Obamacare has been more controversial, with critics charging that the risk-scoring system gives an unfair advantage to larger, older companies—which have more data about their patients—while effectively penalizing smaller, younger competitors.

Especially vocal in opposition was CareConnect, which faced a nine-figure hit from the program while it lost money on ACA plans – even as more profitable competitors collected large payouts.

In 2016, state Department of Financial Services Superintendent Maria Vullo said in a letter to federal health officials that risk adjustment “has created inappropriately disparate impacts … and unintended consequences.” Vullo later issued emergency regulations that would have reduced payments into and out of the risk adjustment program by up to 30 percent.

That policy change had a significant effect on 2018 premiums for some plans and drew a lawsuit by UnitedHealth. Still, CareConnect opted to shut down at the end of 2017.

Early this year, a federal court in New Mexico invalidated the federal risk adjustment formula on procedural grounds. On Monday, Centers for Medicare & Medicaid Services (CMS) director Seema Verma (photo) chose to suspend the program rather than seeking a stay while the case is appealed. Some saw that decision as a strategy to further undermine the functioning of the ACA, which President Trump opposes.

Among those assailing the move was Governor Cuomo, who declared: “Suspending the risk adjustment program is the Trump administration’s latest attempt to do administratively what they couldn’t do legislatively: dismantle the Affordable Care Act.”

Ironically, Cuomo responded with executive action of his own: ordering the Department of Financial Services to explore creating a state-based risk adjustment program, a step that arguably should receive legislative approval.

The governor’s statement made no mention of his administration’s previous criticism of risk adjustment. It also implied that the program was aimed at reducing costs, while in fact it’s a zero-sum game that increases some plans’ costs, and therefore premiums, while saving money for others.

The future of risk adjustment is subject to a long list of uncertainties: