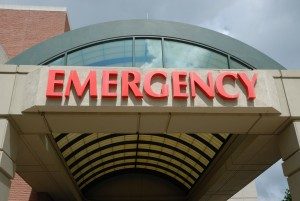 Health plans are bracing for an exodus of healthier customers when the repeal of Obamacare’s individual mandate takes effect in 2019. In response, they’re seeking to hike individual premiums by a weighted average of 24 percent—the largest in a five-year streak of double-digit increases—which will undoubtedly push more people to drop coverage.

Those self-reinforcing trends signal the possible return of a “death spiral,” the phenomenon that virtually killed New York’s individual insurance market before the advent of the Affordable Care Act. 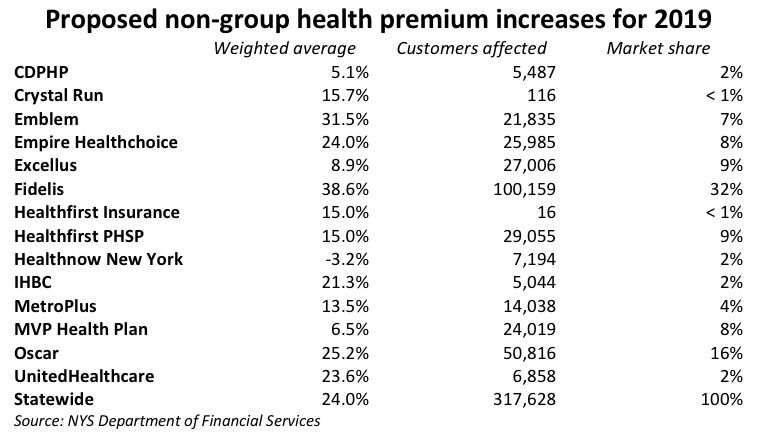 Facing the most dramatic increases are the more than 100,000 customers of Fidelis Care, the state’s largest provider of non-group coverage. Fidelis—a Catholic-affiliated plan in the process of being sold to for-profit Centene Corp.—has requested premium hikes averaging 38.6 percent.

If those rates are approved, it would go from having the lowest average premium on New York’s Obamacare exchange to being sixth-highest out of 14 plans.

At the other end of the spectrum, Schenectady-based MVP Health Plan is requesting a modest 6.5 percent, Albany-based CDPHP is looking for 5.1 percent and Buffalo’s Healthnow New York is proposing to cut premiums by 3.2 percent.

On average, plans attributed half of their proposed increases to the repeal of the individual mandate, which required most Americans to buy coverage or pay a tax penalty. When the penalty goes away in 2019, it’s expected that some healthier consumers will drop coverage – but there is no consensus about how many.

Projections by plans vary widely. Mandate repeal accounts for 25.9 points of the 38.6 percent hike requested by Fidelis, but just one point for New York City Health + Hospitals-affiliated MetroPlus and zero for CDPHP and Healthnow.

Even without the impact of mandate repeal, the plans’ requested rates would still be rising by an average of 12.1 percent—driven largely by higher costs for hospital visits, physician care and prescription drugs.

Meanwhile, enrollment in the state’s commercial non-group market is trending down—from 397,000 in 2014 (the first year of Obamacare) to 318,000 now. Much of that decline is likely due to the advent in 2016 of the state-funded Essential Plan, which offers low- or zero-cost coverage to lower-income New Yorkers. Fidelis is projecting that non-group enrollment will plunge by another 37 percent in 2019.

To be clear: These trends affect a small subset of the insurance market—non-group plans that cover less than 2 percent of the population. Many qualify for tax credits that lower their net costs and reduce or eliminate the impact of year-to-year rate increases.

However, non-group customers with incomes above 400% of the poverty level ($48,560 for a single adult) get no subsidy—and feel the full brunt of any hikes.

The proposed rates are subject to approval by the state Department of Financial Services, which typically sets final premiums somewhat lower than those requested by plans. Its decisions are due in late summer.