The state Department of Taxation and Finance has issued “Guidelines for Implementation” of New York’s new tax cap.  In addition, on a web page of links related to the tax cap, the agency has posted its first-ever annual estimates of growth in assessed property value due to new construction for all New York counties and municipalities outside New York City. 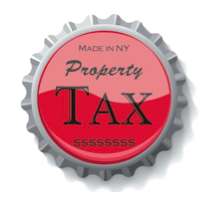 Under the recently enacted tax cap law, beginning with 2012 fiscal years, the annual increase in county, city, town, village and special district tax levies is limited to 2 percent or the rate of inflation, whichever is less.  (School districts are affected starting in their 2012-13 budgets.)  Not included under the cap will be any additional taxes generated by new construction in the municipality — or, as the tax cap law puts it, “the percentage by which the full value of the taxable real property in the local government has changed due to physical or quantity change” between the last two final assessment rolls.”

This pretty much equates to net property value growth due to development, something we’ve never before been able to track so easily at the local level in New York. The resulting county “growth factor” estimates by Taxation and Finance yield this map of property development rates for 2010-11: 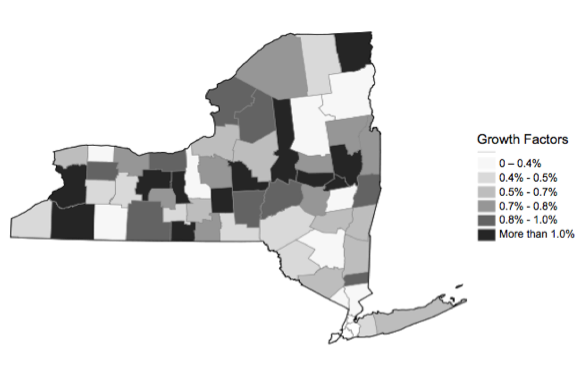 Note that the counties experiencing the most new construction growth in the past year were all upstate.  This isn’t necessarily surprising. For one thing, upstate communities have generally imposed fewer growth restrictions than those downstate. Some, such as Saratoga County, just north of Albany, have been growing for years. And some, such as Chemung County in the Southern Tier, are also benefiting from the economic spinoff effects of the natural gas hydrofracking boom just across the border in Pennsylvania.

Here’s a list of the Top 50 Growth Factor rates among cities, towns and villages.  Again, the majority are upstate, and several are in the Southern Tier: 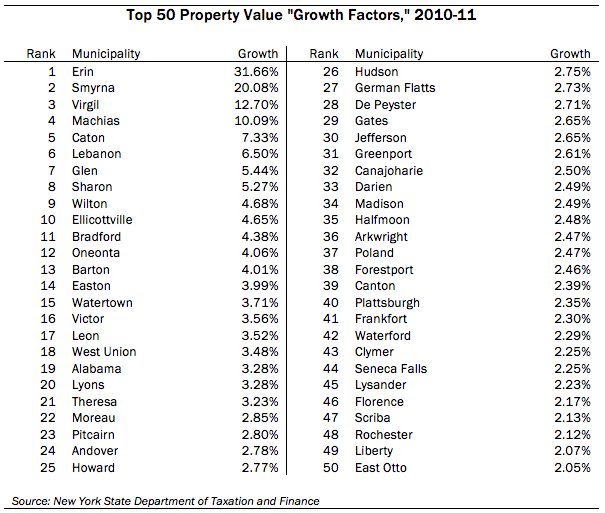 Atop the list is the tiny town of Erin (population: 2,054), just east of Elmira in the heart of the frack border belt, with a growth factor of 32 percent between the 2010 and 2011 assessment rolls. Many of the other municipalities  with double-digit growth in property values due to net new development were also thinly populated rural towns. The largest municipalities to crack the Top 50 were the cities of Rochester and Plattsburgh and Middletown.  (UPDATE: The “Rochester” in the top 50 list is the town of Rochester in Ulster County.)

Putting aside a separate allowance for rising pension costs, the growth factor exception to the tax cap does not mean all property owners in these municipalities will pay tax increases well above the cap.  Rather, in the first year after new buildings are added to the tax rolls, the added taxes they generate will be paid entirely by their owners in addition to the capped taxes paid by owners of properties already on the tax rolls.  In subsequent years, new development becomes part of the tax levy base subject to the overall cap. Making an allowance for taxes generated by new construction ensures that local officials have an incentive to favor development, since it will generate more revenue. Of course, new development also makes it easier for municipalities to avoid busting the cap or even to reduce taxes for everyone else.

On the other extreme, roughly 90 municipalities had growth factors estimated at zero — meaning there has been no new development in the past year.  The list of zero-growth locales includes some small cities such as Amsterdam and Jamestown, as well a few relatively prosperous and populous suburban towns, such as Colonie in Albany County and Greenburgh in Westchester County.  Actually, even “zero” may overstate growth in some of these places, since the tax cap “growth factor” number cannot by law be a negative number, even in cases where demolitions have actually led to a net subtraction of assessed value from the local tax base.