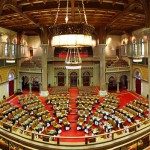 With the clock winding down towards the April 1 start of the next state fiscal year, Assembly Democrats just laid out their one-house budget preferences—and, as usual, the package adds up to a tax-and-spend fantasy.

On the spending side, the big-ticket item in the Assembly’s amended version of Governor Cuomo’s FY 2020 budget bills is a $2 billion hike in preK-12 school aid appropriations. This would include $630 million in added formula aid for the current and 2019-20 school years—plus a $1.36 billion multi-year appropriation to pay for a four-year, statewide phase-in of universal full-day pre-kindergarten, to which Cuomo has been doling out annual re-appropriations of $340 million.

Higher school aid and other net spending increases in the Assembly one-house budget (including rejection of some of the governor’s more recent proposed spending reductions) would be funded by tax hikes aimed at the wealthy—including an added millionaire tax, and the so-called “pied-a-terre” tax on luxury-priced dwellings apartments in New York City.

Assembly Democrats also rejected Governor Cuomo’s proposal to make permanent the 2 percent cap on property tax levies, which since 2011 has been linked to a temporary rent regulation law next scheduled to expire in June. If that law is not extended in its current form, the tax cap would expire in another year; Cuomo has made adoption of the cap (with no changes to the law) a top priority.

The tax cap was among numerous proposals unrelated to the budget that Cuomo nonetheless included in his budget bills—some of which, such as repeal of most remaining legal restrictions on abortion, have since been enacted separately. Also rejected by the Assembly: Cuomo’s proposed version of “congestion pricing” in New York City, and the governor’s proposals to legalize, tax and regulate recreational marijuana use.

Assembly Democrats are expected to vote tomorrow on a resolution expressing support for their amended budget bills, without voting directly on each bill. If the past is any guide, the resolution will be passed on a mostly party-line vote.

Still to be heard from: the Senate’s new Democratic majority, which is reportedly working on its own combination of amended bills and a resolution.

Adding to the SALT wound

On the revenue side, the big-ticket item in the Assembly’s one house budget is a further increase in the state’s surtax on millionaire earners, who are already being clobbered by the new federal tax law capping state and local tax (SALT) deductions.

Cuomo’s budget called for a five-year extension of the existing temporary personal income tax (PIT) top rate of 8.82 percent (atop the permanent top rate of 6.85 percent)—despite the governor’s loud warnings that high earners are more likely to flee the state due to the new federal cap on state and local tax (SALT) deductions. Consistent with past proposals by Speaker Carl Heastie, the Assembly would add these income tax brackets:

Just how many New Yorkers actually earn $100 million a year is anyone’s guess. As of 2016, there were only 2,149 full-year state resident PIT filers who made at least $10 million, which is the cutoff for the state’s official PIT income distribution data (and also for federal income tax data). The average New York State adjusted gross income in this class was about $31 million, suggesting that the number of nine-figure PIT filers is much smaller, probably numbering less than 100.

The SALT cap has raised the combined federal, state and city marginal rate on high earners living in New York City. In raising that rate even higher, the Assembly assumes income millionaires all be simply oblivious to jacked-up rates, even without a federal deduction.

The Assembly budget would impose an added tax of at least 0.5 percent on New York City “non-primary residence properties” residences valued at more than $5 million, with graduated rates of up to 4 percent applying to properties worth $25 million or more.

Although the Assembly bill would not specifically dedicate revenues from the pied-a-terre tax for any purpose, Cuomo has suggested the tax could substitute for congestion pricing and marijuana as a revenue source to underwrite $9 billion in capital borrowing by (or on behalf of) the Metropolitan Transportation Authority (MTA).

By hitting wealthy non-residents, the tax has obvious surface appeal. But because its impact wouldn’t be limited to mega-rich foreign oligarchs and American financiers with fancy homes in multiple states, the tax would also be shortsighted and counterproductive in at least two respects.

First, it would inevitably affect prices in New York City’s increasingly glutted luxury condo market. Falling values for such properties ultimately would also drive down both assessments and taxes. New York residents already living in such properties would also see their values (and return on investments) fall.

Second, even fans of a pied-a-terre tax should recognize it as a poor choice to underwrite long-term capital borrowing, which should be grounded in a steady and reliable revenue stream. Proceeds of the tax could fall more sharply when (not if) the next real estate recession hits—and would also be undermined by gyrations in relative foreign currency values and by economic downturns affecting the home countries of wealthy buyers.

In a related move, the Assembly also would add significantly to the state’s existing 0.4 percent real estate transfer tax. Under the one-house revenue bill, additional tax rates ranging from 0.3 percent to 1.5 percent would be applied on a sliding scale to purchases of real estate valued at $5 million or more. This proposal has the same shortcomings as the pied-a-terre tax—with the added downside of hitting residents and non-residents alike, at a time when the SALT cap has already created a big added incentive for millionaire earners to escape entirely from New York taxation.

In its one-house budget, the Assembly majority lines up behind a proposal to expand the so-called “prevailing wage” law from state-owned buildings and infrastructure projects to a wide range of private developments subsidized by the state, including but not limited to those backed by economic development incentives as well as state-subsidized affordable housing projects.

As explained here, the phrase “prevailing wage” itself is a misnomer, since what the law requires is neither “prevailing” nor limited to wages. Rather, the state Labor Department interprets and enforces the law as requiring contractors on public works projects to pay wages and benefits set forth in construction union contracts—and, in the bargain, effectively makes such projects subject to inefficient union staffing levels as well.

The state’s “prevailing wage” law is triggered by the assumption that union contracts cover at least 30 percent of all the building trades in every area of New York. In fact, as noted here recently, federal data provide increasing evidence that this is simply not the case. However, the Labor Department has never been required to disclose the contracts on which is bases the “prevailing wage” requirement or the process it uses to prove the threshold has been met.