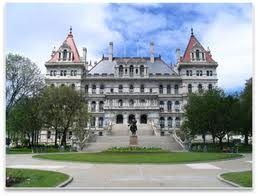 Governor Andrew Cuomo and the Budget Division are spreading the word via Twitter that Standard & Poor’s has given its top AAA rating to the state’s $1 billion sales tax revenue bond issue.

However, the rating can be seen as less as an endorsement of New York’s fiscal practices than an expression of market confidence in borrowing secured by a pledge of up to 25 percent of the state’s nearly $16 billion in annual sales and use tax revenues. Under new budget legislation authorizing sales tax revenue bonds, a “locked box” mechanism essentially will force the Legislature to repay the debt. As coverage ratios go, it doesn’t get much better than that for tax-exempt bond buyers.

The new sales tax bonds are modeled after the state’s personal income tax (PIT) bonds, which also are popular in a marketplace heavily populated by high-income investors looking for a way to avoid high New York taxes.

From the Bloomberg wire:

The bonds, which won’t require voter approval, will provide a new credit in a market hungering for New York borrowings, said Howard Cure, director of muni research at Evercore Wealth Management LLC, which oversees about $4.7 billion. Issuers in the state have sold 34 percent less debt in 2013 than at the same time last year, on pace for the steepest slowdown in at least a decade, data compiled by Bloomberg show.

“With New York state, anytime there’s a new structure for debt, it’s an opportunity to diversify your portfolio, and it should be very well received,” said Cure, who’s based in Manhattan. “It’s another example of New York being creative in devising mechanisms to circumvent voter approval,” which is needed for general-obligation debt.

New York’s general obligation bonds, requiring approval from those pesky voters, currently carry a rating of AA from S&P — which, to be sure, upgraded the state’s outlook from “stable” to “positive” last year.