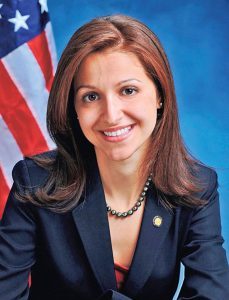 Before voting to mandate insurance coverage for in vitro fertilization, state lawmakers should think through what such a rule would accomplish, how much it would cost, and who would pay the bill.

They should be especially leery of claims that an IVF mandate would save money for the state’s healthcare system in the long term.

The Assembly bill, sponsored by Aravella Simotas of Queens (photo), has been approved by the Insurance, Ways and Means, and Rules committees, teeing it up for a final vote by the full house next week.

A companion bill in the Senate, sponsored by Diane Savino of Staten Island, has yet to leave the Insurance Committee.

IVF – in which eggs are removed from a woman’s ovaries, fertilized outside the body, and implanted in the womb for gestation – is expensive, typically costing about $10,000 per attempt. An insurance mandate would clearly make the procedure more affordable for many New Yorkers who are unable to conceive naturally.

However, like all state-imposed coverage requirements, the mandate would affect people only with state-regulated insurance, primarily those in small groups of less than 100 employees or those who buy insurance directly as individuals. Most large employers are self-insured, making them exempt from state regulation by federal law.

Among people in state-regulated plans, some already have IVF coverage offered voluntarily by their employers. Others can afford to pay the cost out of pocket, or are eligible for state-funded subsidies through New York’s Infertility Demonstration Program, which is available to people with incomes up to $195,000.

The coverage mandate would not apply to the roughly one in three New Yorkers on Medicaid – or, of course, to the 1.3 million with no insurance at all.

Even for the fraction covered, the mandate would not guarantee anyone a baby. A 2015 study published in JAMA study found that the overall rate of live births for women under 40 was 32 percent after one IVF cycle, and 68 percent after six cycles.

Meanwhile, the mandate would almost certainly increase New York’s already high insurance costs. A similar requirement in Massachusetts adds 1 percent to premiums, according to the state’s Center for Health Information and Analysis. That equates to $4.16 per member per month to premiums – or $200 a year for a family of four.

This is just one of dozens of coverage mandates the state already imposes, with dozens more being considered by the Legislature. All apply primarily to the small-group and individual insurance markets, in which buyers are especially likely to drop coverage in response to rising premiums.

Supporters of the bill contend that the mandate would actually reduce healthcare costs, by avoiding some of the multiple births associated with infertility treatment, which can lead to pregnancy complications, premature births, and long-term disabilities. They point to a 2002 study in the New England Journal of Medicine, which found that the multiple birth rate for women using IVF was lower in states that required coverage than in states without a mandate.

“This legislation has the potential to save New York millions of dollars in long-term health care costs, since patients would no longer be forced to rely on higher risk medical procedures,” the sponsors’ memorandum of support declares.

However, the difference in multiple birth rates found by the NEJM study was modest: 36.0 percent in states with a mandate, versus 38.2 percent without a mandate. This was likely because doctors in mandate states implanted fewer embryos per cycle, knowing that their patients could more easily afford to try again. The live birth rate per cycle was correspondingly lower in mandate states: 22.7 percent versus 25.7 percent.

At the same time, the study found that the IVF utilization rate was almost three times higher in states with a mandate: 3.35 procedures for every 1,000 women between 25 and 45, compared to 1.21 per 1,000 in states with no coverage mandate. Thus, even though the rate of multiple births would be lower in mandate states, the overall number of such high-risk births would be far higher.

Applying the study’s ratios to a hypothetical population of 1 million women, the expected number of multiple births under a coverage mandate would be 274, compared to 119 with no coverage mandate.

Supporters further note that eight other states have previously enacted IVF coverage mandates. However, almost all restrict the coverage in ways that control costs, avoid bad outcomes, or both.

Some limit the number of cycles plans must cover, the number of embryos that may be transferred, or the total amount to be spent. Others require women to try less expensive fertility treatments first, or limit the age range of eligible patients. IVF coverage in the health plan for New York State employees includes a $50,000 lifetime cap. Some states exempt small employers.

The Simotas-Savino bill has no such restrictions. In fact, it would repeal the age limit of 21 to 45 that currently applies to mandatory coverage for other infertility treatments.

Another question for lawmakers to consider is the potential expense for taxpayers. A provision of President Obama’s Affordable Care Act says that state government may not add to their respective lists of mandated benefits unless they are willing to reimburse health plans – with tax dollars – for any resulting outlays.

Supporters of the IVF bill contend it does not truly create a new benefit, but expanding the existing mandate to cover infertility treatments other than IVF.

But health plan officials believe the bill would clearly trigger the ACA rule, because the existing mandate, as enacted in 2002, specifically excludes IVF, as does the state’s model contract language established under Obamacare.

Since that provision of the ACA has yet to be enforced, it’s hard to judge where the courts would come down on the question.

Ideally, the Legislature would not vote on an IVF mandate until these and other issues were examined by the Health Care Quality and Cost Containment Commission, which lawmakers voted to establish in 2007. Unfortunately, governors and legislative leaders never fully appointed the panel, and Governor Andrew Cuomo vetoed its unused funding earlier this year.

On Wednesday, Savino called for managers of the state employee health plan to study how its expenditures have been affected by covering IVF. That, at least, would be a start.