The 2015 budget adopted today by the board of the state Thruway Authority was slightly revised from the proposed version but continues to assume rising tolls through 2018.

The “Toll Revenue Target” in the Thruway’s long-term financial plan (see p. 45)  is $26 million higher than toll revenue projected by the authority’s independent traffic engineer for 2015 (see p. 26), growing to $303 million above the annual projection by 2018.

So the basic future trend is little changed, as illustrated below. 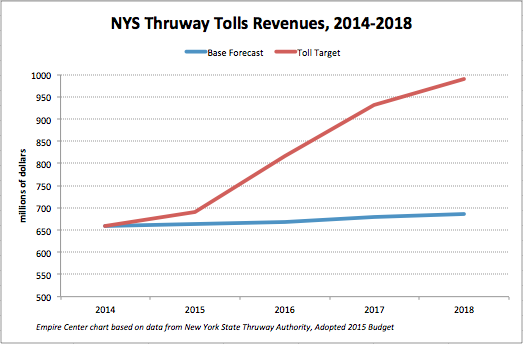 The most significant adjustment to the proposed financial plan reduces “current senior debt service outstanding” by a total of $257 million over the next four years, but also introduces an increase of $308 million in “proposed senior bonds” during the same period, leaving the authority’s revenues net of senior debt service almost unchanged.

As noted here last week, the apparent shortfalls in future Thruway budgets are driven overwhelmingly by costs associated with construction of the new Tappan Zee Bridge.

Assuming the base forecast is correct, the toll target numbers in the adopted budget equate to a roughly 4 percent systemwide toll increase in 2015, growing to 44 percent systemwide in 2018—or, in the alternative, a more than tripling of the current $4.75 car toll on the Tappan Zee Bridge.

Again, it’s important to emphasize that these numbers do not necessarily mean the Thruway Authority will raise tolls, systemwide or on the bridge alone, by the amounts necessary to meet the financial plan targets. But they do mean something has got to give: expenses need to be reduced or (as Governor Cuomo seemed to suggest last week) shifted onto the state budget.  Or something.

By the way, budgeted capital projects in the Thruway’s Albany Division include a new Transportation Resource Center on the site of the authority’s current headquarters near Exit 23. Announced by Cuomo in May, the center will house under one roof the headquarters of the Thruway Authority, the state Canal Corporation (part of the Thruway Authority) and the state Department of Transportation. The estimated construction value in the final Thruway budget is still listed as “TBD,” although a respected construction industry data service estimates the project will cost $90 million. That will add a few million more a year to the Thruway’s toll-supported debt service costs, unless subsidized by the state budget.

(It’s always possible that this budget analysis is overlooking something. In that case, it would be nice if someone associated with the Thruway Authority would clarify.)