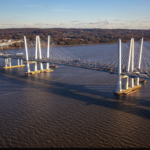 A year after completing its twin-span replacement for the Tappan Zee Bridge, and seven years after starting construction on the project, the state Thruway Authority has finally gotten around to proposing a schedule for raising the eastbound-only bridge toll.**

The toll hike proposal unveiled by the Authority’s board today—at a snap meeting, publicly announced with barely 24 hours advance notice—represents a continuing attempt to minimize and postpone toll increases for as long as possible. It also comes barely a week after Cuomo’s budget director criticized plans by the New York State Bridge Authority, which is also controlled by the governor, to raise the (still much-lower) tolls on several Hudson River crossings north of the Tappan Zee.

** PS— After this blog was posted, details of what the Thruway board is considering as a “toll adjustment” were posted on this page.

As summarized in the Journal News, the proposal for the new Tappan Zee crossing is as follows:

Here’s the slide from the board meeting—: 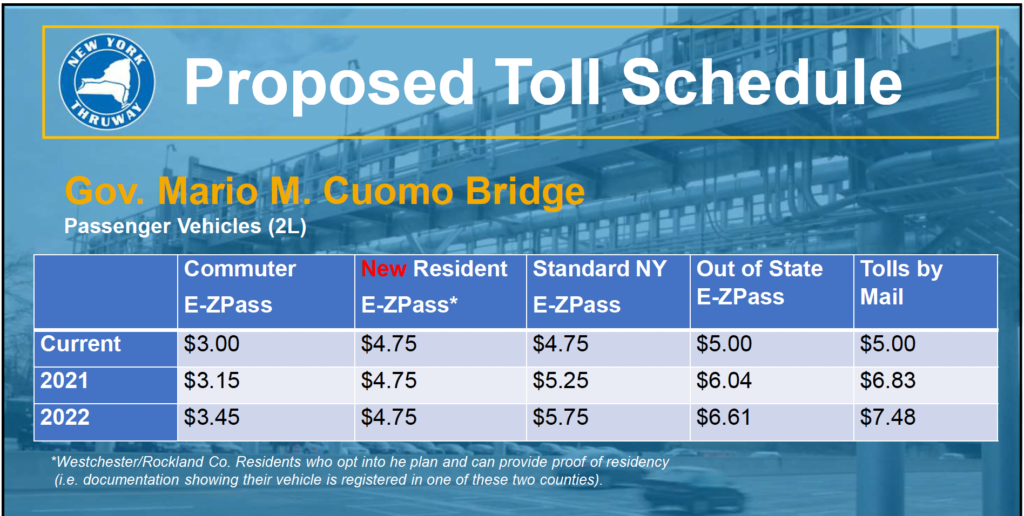 For passenger cars, and especially for regular commuters, this schedule translates into as little as possible, phased in as slowly as possible.

In other words, the Thruway Authority is still kicking the can down the road.

A public comment period and hearing must now be scheduled before the board votes on the toll changes.

Once Governor Andrew Cuomo committed early in his tenure to replacing the Tappan Zee with what he originally called “The New NY Bridge,” what had been a profit center turned into a cost center for the Authority. Obviously, the new, much larger, twin-span bridge would cost billions. How would it be financed?

Even now, we don’t have a detailed answer for that question, much less a detailed accounting of project costs.

The obsolete 1955-vintage Tappan Zee Bridge, even with its increasingly high upkeep costs, was generating a net toll revenue surplus benefitting the rest of the Thruway system, which imposes some of the lowest per-mile charges of any toll road in the country. The Thruway, in turn, until recently had been forced to subsidize the money-losing New York State Barge Canal, which a then- fiscally strapped state government offloaded via a “sale” to the Authority in 1991.

The Cuomo administration initially floated the possibility that tolls would have to more than double to pay for a new bridge. After the (predictable) public backlash, the governor backed off that plan, and ultimately pledged that tolls would be frozen through 2020.

The governor put off the day of fiscal reckoning by having the state budget subsidize a portion of the Thruway Authority’s operations and the cost of State Police Thruway patrols for three years. These were the first state operating subsidies in the history of the previously self-supporting Thruway system.

Then the governor got lucky: starting in 2014, the state his Department of Financial Services began to reap an unprecedented cash windfall from civil penalties imposed on New York-chartered banks—mainly multinationals—charged with various federal regulatory infractions. Out of a slush fund that now exceeds $12 billion, Cuomo’s largest single infrastructure-related allocation was effectively a gift of $2 billion to the Thruway—a very big down payment on the new Tappan Zee bridge.

A year later, Cuomo’s fiscal 2017 budget included language shifting the Canal Corporation from the Thruway Authority to the New York Power Authority. That relieved the Thruway of what’s now a $120 million net annual operating and capital expense (which, as shown here, is now consuming 75 percent of NYPA’s net income from electricity generation and sales).

But that still wasn’t enough. The Thruway, constructed in the space of a few years in the mid-1950s, has massive ongoing capital needs. The full extent of those needs has been somewhat obscured; for example, the Authority hasn’t reported new pavement condition ratings since 2017, when fully one-third of the toll-supported Thruway system was rated “poor” or worse on a pavement distress index, while another 28 percent was rated only “fair.”

The crowning irony of this situation is that the undeniably striking new bridge at Tappan Zee has been formally named after the current governor’s father—former Governor Mario M. Cuomo.

That’s the same Mario M. Cuomo whose 1991 budget initiated the canal system takeover that would drain the Thruway Authority coffers of $1 billion over 25 years, which is one big reason why tolls on the “Cuomo Bridge” will still need to get higher, faster in the long run.