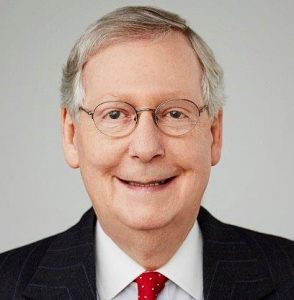 Lacking the votes to pass a comprehensive health plan, Senate GOP Leader Mitch McConnell (photo) has called for partially repealing Obamacare now, but with a two-year delay to give Republicans more time to develop a replacement.

The bill he has in mind, which previously passed both houses of Congress, would eliminate some provisions of the Affordable Care Act, including the mandate for individuals to buy coverage and the tax credits that offset high premiums for lower-income consumers.

But other, more popular provisions of the ACA would remain in place, including its requirement for insurance companies to cover pre-existing conditions, and its ban on charging higher premiums based on health status.

President Trump has tweeted his support for the repeal now, replace later approach. He and McConnell seem to think the two-year deadline would pressure more Republicans, and maybe even some Democrats, to support a replacement plan.

Already, however, several Republican senators have signaled their opposition to repeal the ACA without a replacement, raising doubt that such a bill could pass.

If such bill did become law, and were allowed to take effect, it would effectively replicate the insurance disaster that hit New York after 1992, when then-Gov. Mario Cuomo and the Legislature enacted ACA-like restraints on health plans without ACA-like subsidies or mandates for consumers.

Obliged to enroll customers with costly, chronic conditions without charging them extra, the state’s insurers had no choice but to hike premiums across the board. Health customers responded by dropping their coverage, leaving behind a sicker risk pool and pushing premiums up even higher.

Eventually, premiums soared as high as $100,000 a year, which only a few thousand very sick but wealthy individuals could afford to pay. It was a classic insurance death spiral, and a cautionary tale for health policymakers ever since. It ended only when the ACA took full effect in 2014.

Scoring an earlier partial repeal bill similar to what McConnell proposed, which would also roll back the ACA’s expansion of Medicaid, the Congressional Budget Office estimated that it would eventually add 32 million to the ranks of the uninsured – which was more than full repeal. The CBO further forecast that non-group premiums would jump 20 to 25 percent right away, and double over 10 years.

The lessons of New York history suggest that those grim projections are no exaggeration.