The Metropolitan Transportation Authority has agreed to a seven-year contract that will give MTA cops base pay increases totaling 18 percent, including a 7.5 percent retroactive boost effective immediately, the Daily News reports. Union members also scored a boost in their longevity pay, which will rise to a maximum of $9,800, in exchange for agreeing to curb overtime, stretch-out the schedule of annual pay hikes for newly hired officers and make new recruits pay 2 percent of their salaries toward health insurance.

The News said the deal’s generosity “stunned” other MTA unions–particularly the one representing Long Island Railroad employees, who reportedly are prepared to strike as soon as March 21, thanks to failed contract negotiations with the MTA. 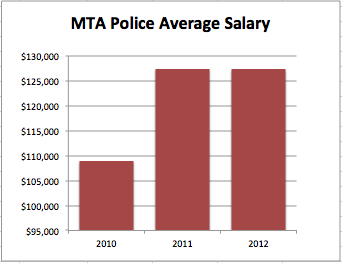