The following table shows the five highest-paying employers in Long Island for general employees and police or firefighters:

“Police and firefighter pay has increased at three times the rate of other public-sector pay,” said Executive Director Tim Hoefer.  “This is the result of antiquated policies and laws that discourage fair negotiations between public employers and unions and necessitate further tax increases on already-burdened homeowners and businesses.”

“The Empire Center produces this report because it is committed to protecting the right of taxpayers to know how their money is being spent,” said Hoefer. “Employee compensation is the single largest component of most municipal budgets. Pairing this pay data with the localized spending data in SeeThroughNY’s Benchmarking NY tool, taxpayers can get a real sense of how their local governments are spending their tax dollars.” 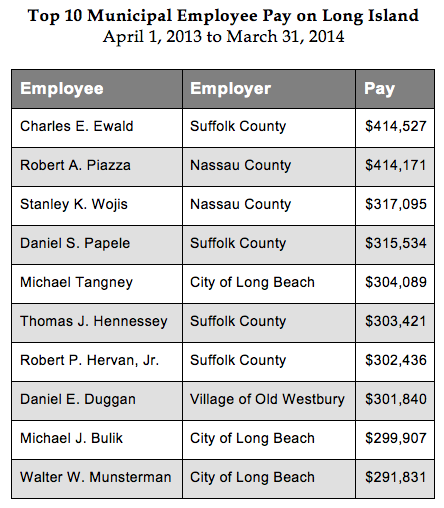