ALBANY – Voters across New York will head to the polls next week to decide whether to approve school budgets that on average would increase how much is collected by property taxes by 2.5%.

School boards are putting budgets before property taxpayers that statewide would increase spending 2.6% on average, slightly more than the tax-levy increase.

The budget vote for the state’s nearly 700 districts outside its largest cities is next Tuesday, May 21.

Eighteen school districts, or less than 3%, are seeking voter approval to override the property-tax cap, which limits increases to the lower of 2% or the rate of inflation for the fiscal year that starts July 1.

Only a few school budgets fail each year, and often they are in districts that are seeking a 60 percent vote to override the cap.

What’s the school spending this year?

New York by far spends the most per capita in the nation on its schools, and state aid to schools this year reached nearly $28 billion, up 3.8% from the previous year.

Five proposed overrides are from districts in the North Country; no other region has more than two, the group noted.

Here are the number of property-tax overrides sought by school districts each year since the tax cap was installed in 2011. (Photo: New York state Association of School Business Officials)

Among the overrides is the Brighton school district in the Rochester suburbs, whichsays it has been shortchanged on its state aid and is seeking a tax levy increase of 4.9%, which is $1.3 million more than allotted under the tax cap.

Voters have an additional incentive to keep their districts under the cap this year. A property-tax rebate check is tied to a school district staying under the cap.

The checks averaged about $350 last year and will grow this fall, which is the last year of the program.

The tax cap, first installed in 2011, was made permanent this year as part of the state budget, which was approved April 1.

Schools have tried fewer overrides in recent years as voters often reject the attempts, falling from a high of 53 in 2012. 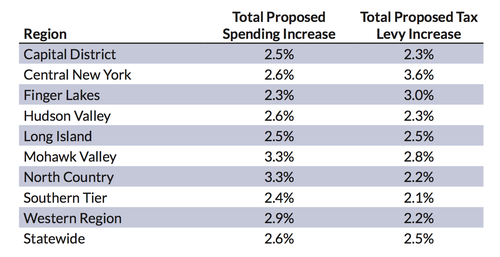 Here are the proposed tax and spending increases proposed by school district in each region of New York for the fiscal year that starts July 1, 2019. (Photo: New York state Association of School Business Officials)

The smallest proposed spending increase is in the Finger Lakes at 2.3%, according to the Association of School Business Officials.

The Southern Tier has the lowest proposed tax increase at at 2.1%, while the largest was in central New York at 3.6%.

But while districts are largely staying under the cap, most are just below it.

About 280 districts are right at their tax cap limit without going over, the data released by the state Education Department showed.

Schools are also benefiting from an ongoing decline in enrollment amid a stagnant state population.

Schools, excluding the Big 5 districts of Buffalo, Rochester, Syracuse, Yonkers and New York City, are proposing to increase taxes by $539 million despite an enrollment drop of 7,827 students, or a 0.5% decline, the Empire Center for State Policy, a fiscally conservative think tank said.

Student enrollment has dipped to its lowest levels in 30 years, the group has pointed out.

Region’s homeowners among hardest hit by taxes in state