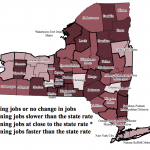 Year-over-year private-sector job growth has picked up in Buffalo and Rochester but is still sinking in the Southern Tier and weakening in the Hudson Valley, according to the latest statistics from the state Labor Department.

New York State as a whole was behind the U.S. pace during the 12 months ending in September, gaining private jobs at a 1.7 percent rate, compared to a national rate of 2.1 percent.

As also noted in the Labor Department’s monthly report, New York’s “statewide unemployment rate decreased from 5.2% to 5.1% in September 2015, reaching its lowest level since April 2008 and falling in line with the United States as a whole.”

However, the background labor data released today also showed that the labor force participation rate dropped for a third consecutive month, suggesting that unemployment is down mainly because fewer people are looking for work.  That trend is illustrated in the chart below: